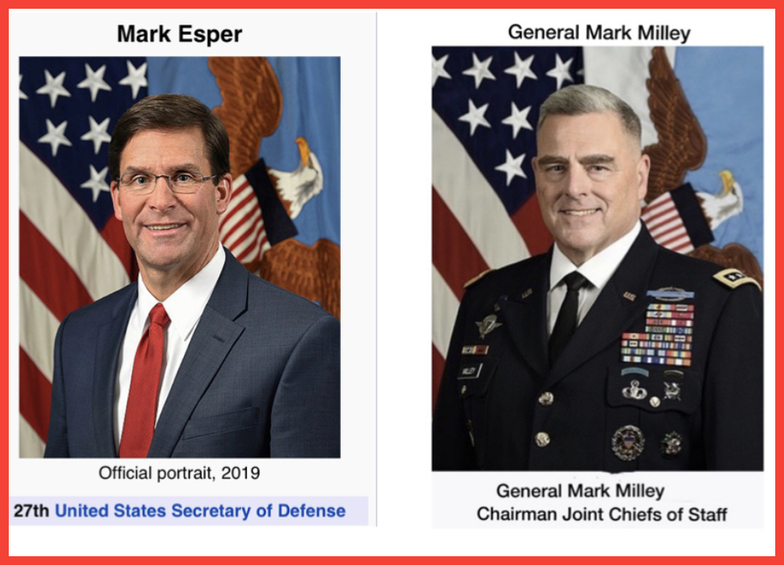 I recently read the open letter to you authored and signed by Lieutenant Colonels John Nagel and Paul Yingling.  This and the Transition Integrity Project are my reasons for writing to you.

Before I go to the purpose of my letter to you, General Milley, I want to tell you about me and my experience. I am a wife of 46 years and a mother. I am a retired airline executive who managed large numbers of airports and equally large numbers of employees. I worked my way up and earned every dime I ever made. I am also a retired government employee. Yes, I have retired from two jobs. My husband and I also own a corporation that is still thriving despite the pandemic. There is really nothing remarkable about us.  We worked really hard just like so many other Americans. Throughout my career, I listened and learned. Dealing with vast numbers of employees helped to build my smoke detector. And, today it is still in excellent shape. I have worked for some of the best and some of the worst. As I proceeded in my career and from ownership of a corporation, it became evident to me who I wanted to be and who I did not want to be. I was, and I am very predictable by choice. Anyone who has ever worked for me – like me or not, my employees knew where I drew the line with poor performance. My employees also knew what I would do about it. I am proud of that. Those who performed well were rewarded, and those who did not, received a thorough understanding of the error of their ways. When I say I am going to do something, I do it. My word is my reputation.

I share this with you because I know that you did not get where you are by being a dummy. I want you to understand clearly, neither did I. Now that a level playing field is established, I will explain why I am writing to you.

I am curious.  General Milley, does it bother you at all that two Lieutenant Colonels wrote a public letter disparaging the Commander in Chief?  I can only say, it would never, ever be tolerated in my arena.  These two colonels are essentially asking you to commit sedition if not outright treason.  I know that legally, you have no authority to remove the President.  That job, if needed, will fall to the Secret Service.

I just finished reading the entire document detailing the Transition Integrity Project (TIP). I have no doubt you are familiar with it. TIP claims to be bipartisan, but it is not. Yes, there were Republicans that participated with the left in the development of this document. But you and I both know they are not Republicans. They merely are traitors who ran on a Republican ticket. They are members of the one percent club, the ruling class, who believe only they should govern.

TIP was convened by Rosa Brooks, a law professor at Georgetown and former Pentagon senior official, and Nils Gilman, a former vice chancellor of the University of California, Berkeley and historian at the Berggruen Institute. Brooks worked as Special Counsel to the President at the Open Society Institute, George Soros’ philanthropic foundation. She has also been a consultant for Human Rights Watch, a fellow at the Carr Center for Human Rights Policy at Harvard, a board member of Amnesty International USA and a member of the Executive Council of the American Society of International Law. She served on the board of the Open Society Foundation’s U.S. Programs Fund and currently serves on the board of the Harper’s Magazine Foundation, the Advisory Committee of National Security Action and the Steering Committee of the Leadership Council for Women in National Security.

Members of the Transition Integrity Project include;

There are some astounding revelations in the above two paragraphs.

There is also something that failed to be mentioned, and it is, in my opinion, intentionally so. What was left out is that retired General Stanley McChrystal is the leader of this effort.

We know on November 16, 2016 General McChrystal rejected the offer to be the President-Elect’s first choice of Secretary of Defense saying, “I’ve been watching the campaign and I don’t think I’d be a good fit for the …team. I don’t think I would be happy. Also, I’m not sure the President would be happy.” Of course we have read the Rolling Stone article about the General. General McChrystal is smart as a fox. I don’t trust the behavior of a fox.

Former Chair of the Republican National Committee, Michael Steele, is a member of TIP. His wife, Michelle Steel, is running for U.S. House of Representatives in California’s District 48 on a Republican ticket. This revelation certainly explains why Mrs. Steel refused to answer when asked if she supported our President. I clearly understand now that neither does.

I am not addressing every participant in TIP. The names are familiar to all of us.

Looking at TIP members brought me to the corrupt Atlantic Council. That description represents my opinion. My opinion is based upon the members and the fact that it is an American think tank deeply embedded in globalism and war. We all know that Soros and Victor Pinchuk are bad, corrupt men. Why would any reputable organization accept donations from corrupt individuals? Why would any reputable organization make Victor Pinchuk a board member? Both are evil and corrupt.

But the most damning revelation was the amount of taxpayer money “donated” to this nefarious organization by the military-industrial complex and the State Department. I believe that our taxpayer money is being doled out to plan and execute an overthrow of our government. When I see George Soros tied to both TIP and the Atlantic Council, Soros, Tip, and The Atlantic council all become suspect.

I also believe the two Lieutenant Colonels who authored the letter to you are part of the TIP plan to overthrow our government. General, I have the following questions for you;

1.  Are you a part of it? In my opinion, only time will tell us if you are loyal to your country and will follow the orders of your Commander in Chief. I have not yet formed an opinion of you. At present, you are on my favored list. I have heard you speak boldly, and I like that.

2. Should the President invoke the Insurrection Act, whose side will you join? Are you going to refuse your Commander in Chief’s order to restore our country to order, or will you order the military to take out the United States of America’s conservative citizens and remove our President from office?

3.  If ordered, will you arrest the very people who are buying and paying for America’s destruction, or will you refuse?

5.  Do you support the TIP plans for initiating civil war against conservatives, against their own country, and against the President of the United States?  There is only one conclusion that can be made.  The Tip report was intentionally leaked so that conservatives will understand that if we don’t vote for Joe Biden, civil war be launched upon us.  I say bring it on and I would not want to be in their shoes if and when that happens.

6.  Will you order your military to support conservatives? I am asking whose side you are on.

7.  How or what did you do to handle the letter from the two colonels? To do nothing, is an admission of who’s side you are on which means you probably need not bother answering any of the above questions.

General Milley, my questions are fair. The American people and our President deserve and have a right to know your position and the action you will or will not take against us. I know without any doubt whatsoever, our President adores and respects our military.  I suspect he feels much the same way conservatives feel about our military leaders.

But, this is where I am conflicted.

Department of Defense Secretary Esper and you and your military leaders advised the President not to call in the military when the riots started and continue to this day.  ALL of us, including you and your military, are just sitting back allowing America’s carnage to continue, people being beaten and murdered by thugs in America, people losing their livelihoods because their places of employment have been burned to the ground, businesses destroyed, burned and looted. Am I, an American citizen, to assume you will do more of the same which would be nothing if and when General McChrystal initiates civil war upon conservatives?

Tell us, please, exactly what you will do when traitorous, retired General McChrystal initiates civil war upon the conservatives in this country. We will not initiate civil war.  But if it is brought upon us, we will end it.  Either you are a man of honor or not.  Which are you?

You can find me on Twitter and Parler @TheSheilaG2020 (same handle for both). Sheila G is a member of Conservative Choice Campaign which is also a member of the KAG Coalition