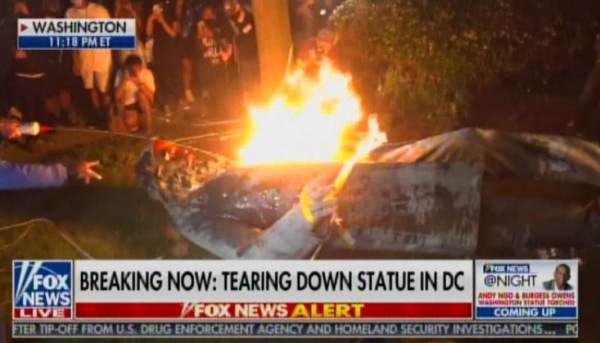 The statue toppled by a mob in Washington, D.C. Friday night was federal property owned by the National Park Service just blocks from the Capitol, yet for hours as protesters gathered around the statue trying to pull it down Park Police were apparently not on scene. Park Police Officer Webster who answered a phone inquiry by TGP around 11:19 p.m. EDT said officers were on their way to the statue. When informed a minute later that Park Police were too late and that the statue had been taken down and set on fire Officer Webster snapped that the Park Police had other things going on tonight.

Fourth and fifth failed but the sixth… pic.twitter.com/yYhfkupZPU

Demonstrators ignited lighter fluid and flares atop the statue as it lay. Several lit cigarettes. pic.twitter.com/ys5kwM9qlk

The statue of Albert Pike was located next to the headquarters of D.C.’s Metropolitan Police at 300 Indiana Avenue, NW. MPD had officers on the scene who did not intervene to protect federal property from the mob and no arrests were made. One officer reportedly put out the fire.

While protesters are scaling the Albert Pike statue, figuring out where to wrap the ropes, a group of people are on the ground are holding on to the ropes. Another group is forming a circle around them, standing between them and cops. Police are not intervening pic.twitter.com/o2AVV9AnPO

The Pike statue has a controversial history in D.C. because even though it was erected by Masons in honor of Pike’s service to the Masons, he also served as a Confederate general in the Civil War and there were unproven rumors Pike had been a member of the KKK. The statue was approved by Congress in 1898 with the understanding Pike would be honored as a civilian and not a soldier. The statue was dedicated in 1901 and was relocated in 1977 after highway construction.