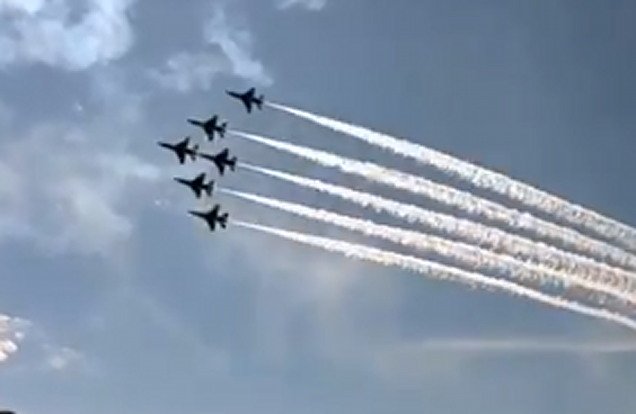 The Blue Angels of the U.S. Navy and the Thunderbirds of the U.S. Air Force are doing flyovers of certain cities to honor the first responders in the Coronavirus crisis.

These planes are so amazing. Anyone who gets to see them fly over in person is getting a real treat.

The U.S. Air Force Thunderbirds and the Navy Blue Angels demonstration squads began their flyover of the United States on Tuesday to honor first responders in the fight against coronavirus, beginning in New York City, Newark, Trenton, and Philadelphia.

Thousands stopped to watch as the formations of six Air Force F-16 Fighting Falcon and six Navy F-18 Hornet aircraft looped over the cities, including many first responders:

“We are truly excited to take to the skies with our Navy counterparts for a nation-wide tribute to the men and women keeping our communities safe.” said U.S. Air Force Lt. Col. John Caldwell, Thunderbird 1 and mission commander for the flyover, dubbed Operation America Strong.

“We hope to give Americans a touching display of American resolve that honors those serving on the frontline of our fight with COVID-19,” he said.

See the videos below:

What is America Strong? Hear what America Strong means to the Flight Leaders of the @BlueAngels and @AFThunderbirds #Americastrong #Inthistogether pic.twitter.com/Iscfb1aK0y

Thank you @BlueAngels and @AFThunderbirds for honoring all those who are heroically serving on the front lines of the city's response to COVID-19 #AmericaStrong#Inthistogether pic.twitter.com/R4xNJoveMf

In flight over Philly with the @BlueAngels. pic.twitter.com/Bgs4CtpYvb

Blue Angels and Thunderbirds over the Brooklyn Bridge