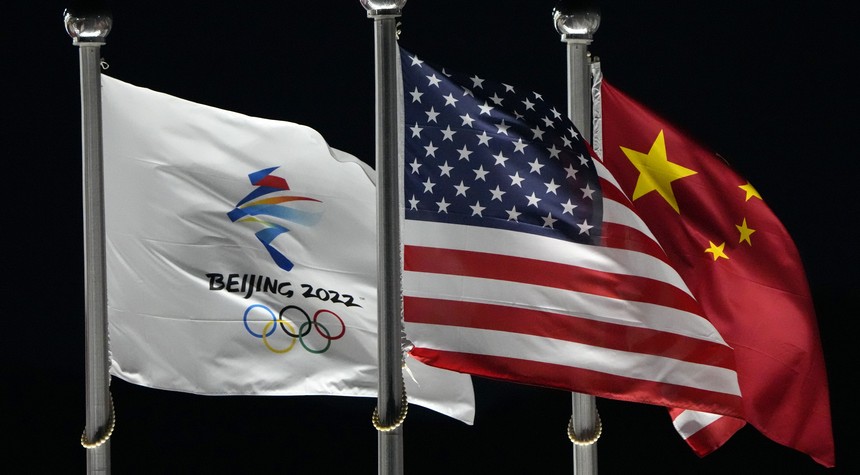 I wonder what China threatened the athlete with to make sure he smiled brightly during his moment in the spotlight.

Either way, NBC News seems pretty excited about it:

It makes me cringe to think we’re only on day one of the Games and their commentators are already producing soundbites as queasy as this:

In fairness to the network, they made sure to cover China’s oppression of the Uyghurs during last night’s broadcast. Watch this clip of Mike Tirico delving into the subject. However much NBC might want to sweep the matter under the rug in the name of producing a traditional fluffy Olympic spectacle, they’d be savaged here at home if they whitewashed the CCP completely.

But one thing they can do to try to stay on China’s good side is not take a position themselves on the regime’s human rights abuses. Instead of asserting that there’s a genocide going on in Xinjiang, NBC has said that the U.S. government claims there’s a genocide happening. Studious neutrality as to the truth seems to be the way they intend to play this:

Journalist Andy Brown, one of NBC’s China experts, called it “the most sensitive issue” of the Olympics and said only that Western governments and human rights groups “allege” that the Chinese government is engaged in the systematic repression of Muslim Uyghurs in Xinjiang.

“They allege that this is a massive program of social engineering aimed at suppressing Muslim Uyghur culture, language, tradition, identity,” he added. “They allege a host of human rights abuses, forced labor, coercive birth control practices, indoctrination and that all this adds up to a form of cultural genocide.”

He adds: “It has to be said that the Chinese government emphatically denies all of this. They say that accusations of genocide are the lie of the century.”

We’ve spent the last week watching celebrities pull their music off of Spotify to protest Joe Rogan’s studious neutrality as to whether vaccines work. What sort of boycott should NBC draw for engaging in the same sort of willfully obtuse credulity about a genocide?

Savannah Guthrie’s “in your face” comment in the clip is especially cringy because of the note of sympathy it betrays for China. It’s not just a corny — and offensively inaccurate — way to explain what the CCP hopes to achieve by having a Uighur light the torch, it’s the sort of term you’d use only if you’re capable of viewing a dispute from the perspective of the people you’re describing. In reality, this isn’t an “in your face” moment; it’s propaganda designed to gaslight the world about the oppression Uyghurs face in China. They turned the opening ceremony of the Olympics into a Potemkin village.

Even the Nazis felt compelled to dress up one of their concentration camps for international consumption, to show the world that Jews weren’t being mistreated after all. Imagine describing that as an “in your face” response to critics warning the world that the Holocaust was under way.

Does Pelosi sincerely fear for the safety of U.S. athletes or is she just afraid of confronting China? Well, recall that she was way ahead of the curve on calling for a diplomatic boycott of the Beijing Games, proposing the idea in May 2021. She went after corporate America for its involvement in the Games too:

Pelosi blasted corporate sponsors of the games who “look the other way on China’s abuses out of concern for their bottom line.” She specifically called out companies that reportedly lobbied to weaken parts of a bipartisan bill targeting the use of forced labor in the Xinjiang region.

“If we don’t speak out against human rights violations in China for commercial reasons, we lose all moral authority to speak out for human rights anywhere,” Pelosi said.

In December, when the Uyghur Forced Labor Prevention Act finally passed Congress, she celebrated the news this way:

She’s not in denial about the Uyghur genocide or afraid to call China out on it. I think she genuinely does worry what might happen to American athletes if they echo her points while in de facto Chinese custody. Let that serve as the latest reminder that the Games should never be sanctioned in countries where participants might reasonably fear reprisal if they criticize the government. Or where commentators might describe a cover-up of genocide as an “in your face” retort.

This content is courtesy of, and owned and copyrighted by,https://hotair.com/ and its author.
This content is made available by use of the public RSS feed offered by the host site and is used for educational purposes only.
If you are the author or represent the host site and would like this content removed now and in the future,please contact Conservativechoicecampaign.com using the email address in the Contact page found in the website menu.