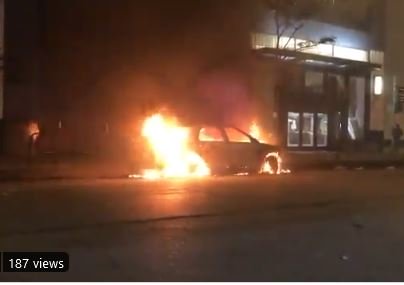 This didn’t make any headlines.

During the rioting and looting in Chicago last weekend one man was murdered.

The ‘peaceful’ protesters weren’t so peaceful.

Several other people were shot in the same are near Water Tower Place around the same time that same night.

Newly revealed in police crime data is a fatal shooting in the 800 block of North Michigan on Saturday, May 30. Asked about the murder, a Chicago Police Department spokesperson this week said a 23-year-old man arrived at Northwestern Memorial Hospital around 9:34 p.m. with gunshot wounds to his chest, abdomen, shoulder, and arms. He was later pronounced dead.

“This incident happened during the protest, however further details of the incident are currently unknown and under investigation by Area 3 detectives,” the spokesperson said.

A CPD source said the victim did not have any previous contact with Chicago police.

GPS data attached to the murder record correspond to a location directly outside Water Tower Place. CWBChicago reported on May 31 that Chicago police located a man with gunshot wounds on the side of Water Tower Place at 9:39 p.m. May 30, but no further information was available about the case at the time.

Within 15 minutes of the Michigan Avenue killing, three other people were shot within two blocks of Water Tower: two on the 100 block of East Oak Street and another on the 800 block of North Wabash, according to CPD records.