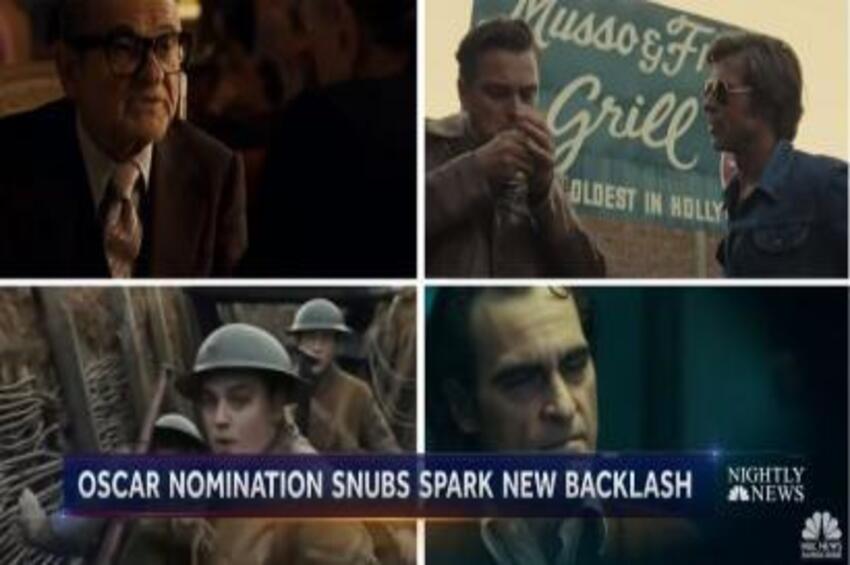 The New York Times continues to ruin nights out at the movies. Entertainment reporters Brooks Barnes and Nicole Sperling lamented the Academy Awards nominations: “The Oscar Leaders, And the Overlooked – With 11, ‘Joker’ scores the most  nominations.” “The Irishman,” “Once Upon a Time … in Hollywood” and “1917” each received 10 nominations. Black actors and actresses were largely overlooked.”

Don’t forget women! The Times certainly didn’t. (It won’t shut up about it.)

Despite a plethora of diverse films competing for Oscar attention this year, the 9,000-member Academy of Motion Picture Arts and Sciences largely maintained its traditional point of view, handing out the most nominations to four very male, very white movies. “Joker” (Warner Bros.), which portrays the DC Comics villain as sharing the psychological traits of real-life mass shooters, led all films with 11 nominations….

Kyle Buchanan’s “Carpetbagger” column, “The Big Surprises And Glaring Snubs,” made a radical case for quotas.

After the British organization BAFTA nominated 20 all-white acting nominees last week, pundits fretted that the Oscars might pull a similar move. That crisis was averted, though just barely, when the “Harriet” star Cynthia Erivo landed an Academy Award nomination for best actress….

Buchanan actually previewed his outrage last week, squeezing as much out of the made-up controversy as possible: “After Oscar Season’s Wildest Week, a Troubling Takeaway — As the field continues to narrow, female filmmakers and actors of color appear increasingly sidelined.”

….why is your Carpetbagger in no mood to celebrate?

Because that narrowing list has begun to exclude not just some of the most exciting performances and films of the season, but also many of the movies directed by women or featuring people of color. And though the academy, which is due to release its nominations next week, has taken great pains to diversify itself since the years of #OscarsSoWhite, this past week suggests that other awards bodies still have a lot of soul-searching to do, and that this issue may require a total shift in what’s considered weighty and worthy.

Instead, the guild nominated Martin Scorsese (“The Irishman”), Quentin Tarantino (“Once Upon a Time … in Hollywood”), Sam Mendes (“1917”), Bong Joon Ho (“Parasite”) and Taika Waititi (“Jojo Rabbit”). Both BAFTA and the Golden Globes substituted the “Joker” director Todd Phillips for Waititi, but no matter how you slice it, these are male-dominated movies, and nearly all of them feature a panoply of violent acts (with murders that include stabbings, hangings, shootings and death by flamethrower).

For Buchanan, affirmative action isn’t enough. We must change what we like about movies themselves.

….Changing those entrenched attitudes will require not just diverse membership rolls, but a willingness to investigate who and what we deem important. It won’t be easy to celebrate the wins to come when it’s clear that so much is still lost.