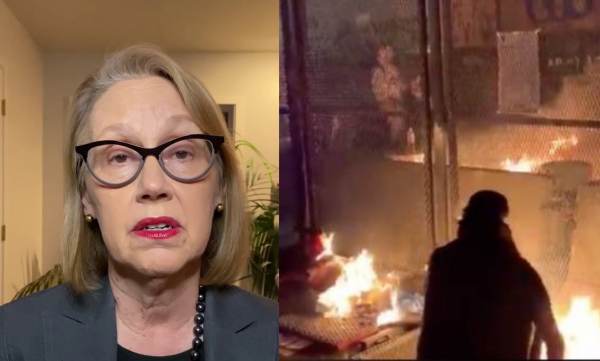 As reported last week, Oregon’s far left attorney general, Ellen Rosenblum, sought a federal court order to protect her terrorist friends and prevent the feds from intervening in the continuous riotous acts that have been ongoing in Portland. Her motion was DENIED today by a judge in the very same courthouse that has been subjected to the repeated vandalism and arson.

A federal judge on Friday afternoon denied a request by Oregon Attorney General Ellen Rosenblum to issue a temporary restraining order against federal officers making arrests of Portland protesters without probable cause.

In his ruling, U.S. District Judge Michael W. Mosman said Rosenblum had failed to provide sufficient evidence that such arrests were occurring widely in the streets of Portland or were part of a federal policy. (Disclosure: Rosenblum is married to the co-owner of WW‘s parent company.)

He ruled that because the state of Oregon couldn’t establish a pattern or policy, it lacked the legal standing to seek to halt future incidents.

The judge’s ruling is a painful setback for Oregon officials and demonstrators who hoped to rebuke President Donald Trump and rein in the actions of the federal police he deployed to quash six weeks of uprising and upheaval. It marked a swift end to an ambitious legal strategy that as recently as this afternoon was endorsed by Portland City Hall, which asked to provide expert testimony.

Mosman’s ruling emphasized that Rosenblum had set a high degree of difficulty for herself by bringing an unusual request to his bench. He said victims of illegal treatment by police typically seek redress for themselves. But in this case, the state sought to ban future, hypothetical actions by police—many of which he noted were already illegal and did not need him to outlaw them.

That left the state with a higher evidentiary burden: proving that the violations were taking place on a large scale, and that a restraining order was needed to protect its citizens from future danger.

Mosman wasn’t persuaded that danger was real. He tore apart the state’s argument that Portland protesters would