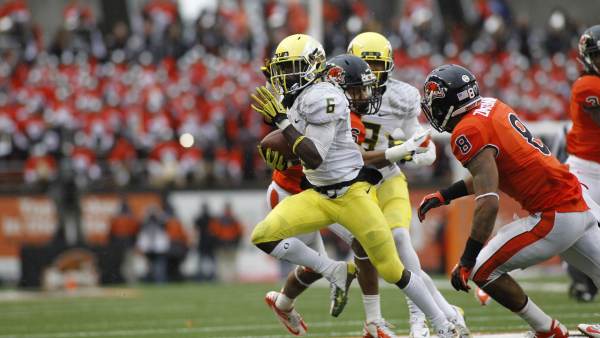 The University of Oregon Ducks and Oregon State University Beavers football teams have mutually agreed to cease referring to the annual rivalry game as The Civil War. Because it’s offensive. Or something. SOMEHOW.

The University of Oregon and Oregon State University Departments of Athletics have mutually agreed to no longer refer to Oregon-Oregon State rivalry games as the “Civil War.” This decision is effective immediately and includes all athletic competitions in the 2020-21 academic year and in the years ahead.

The schools made the decision following mutual discussions as well as conversations with university officials and input from current and former student-athletes from both schools.

“Today’s announcement is not only right but is a long time coming, and I wish to thank former Duck great Dennis Dixon for raising the question and being the catalyst for change,” said Oregon Director of Athletics Rob Mullens. “Thanks also to our current student-athletes for their leadership and input during this process. We must all recognize the power of words and the symbolism associated with the Civil War. This mutual decision is in the best interests of both schools, and I would like to thank Scott Barnes for his diligence as we worked through this process. We look forward to our continued and fierce in-state rivalry with Oregon State in all sports.”

“I want to acknowledge and thank the current and former student-athletes who raised concerns about the historic name of the rivalry games played between our two institutions,” UO President Michael H. Schill said. “We need to make this change to align the words and symbols we use around athletic endeavors with our shared campus values of equity and inclusivity. While the name of our annual game might change, it will absolutely continue to be one of the great rivalries in college sports.”

The football series between Oregon State and Oregon continues with the 124th annual game on Nov. 28 at Reser Stadium in Corvallis, ranking this rivalry fifth in college football for the most games played in the series. The Oregon-Oregon State series holds the collegiate record for the most men’s basketball games played with 354.