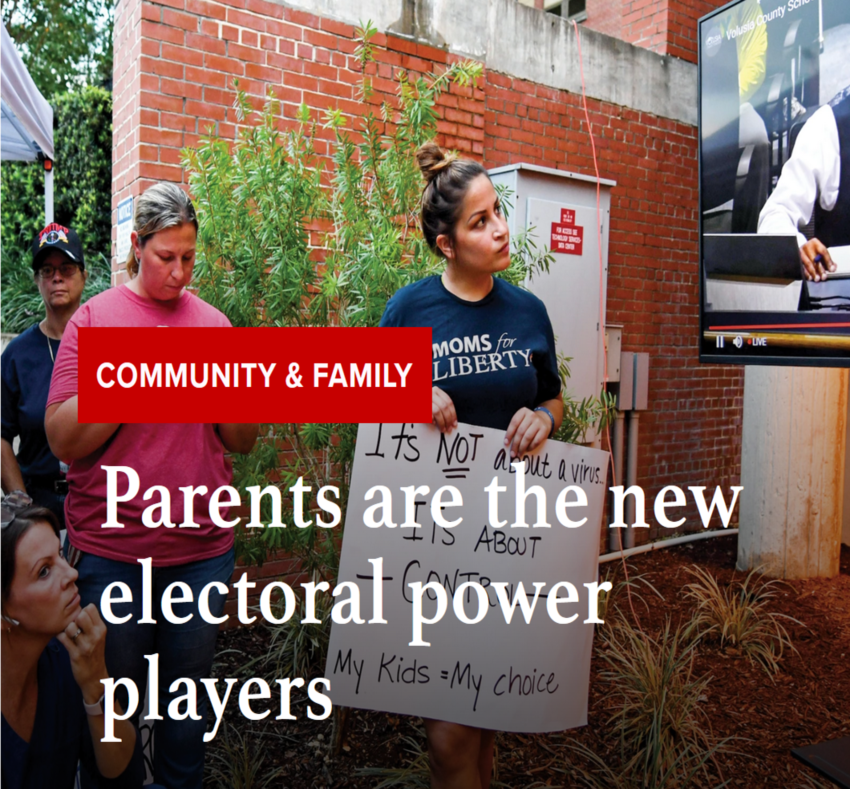 In Virginia, a state that went 10 points for President Joe Biden just last year, Republican Glenn Youngkin beat Democrat and former Gov. Terry McAuliffe by 2 points earlier this month. Since election night, much of the legacy media, and many Democrats, have been in denial about the significance of their defeat. Instead of looking inward to figure out why voters changed their minds, many have chosen to gaslight parents upset about their children’s education and to label these constituents as “ white supremacists .”

Although the media have generally conceded that the election had to do with parents upset about their children’s educational experiences, anchors have consistently repeated McAuliffe’s mantra that critical race theory “ is not being taught in Virginia public schools .” At this point, some anchors are essentially covering their ears and closing their eyes, rocking back and forth, and repeating what they wish to be true.

A recent exchange between CNN’s Brianna Keilar and Sen. Rick Scott highlights this phenomenon. The Florida Republican pointed out that McAuliffe lost partially because he pretended that critical race theory wasn’t in Virginia schools, and he shared a 2015 training document from the Virginia Department of Education website instructing staff to “embrace critical race theory” and to “re-engineer attitudes and belief systems.” Before changing the subject, the CNN anchor just repeated that critical race theory “is not in the curriculum” several times.

Calling your potential voters “ deplorables ” wasn’t a winning strategy in 2016. This kind of gaslighting isn’t going to work, either. As Scott pointed out in the interview, “[CRT] is happening. And I hope Democrats continue to say it’s not happening because parents aren’t dumb. They can see it. … I hope Democrats keep doing that all across the country.”

The media might believe they have the power to shift the narrative on this topic. But parents aren’t going to forget how powerless they felt over their children’s education over the past year and a half. Parents aren’t going to forget how power-hungry teachers unions pushed to keep schools closed, holding education hostage in order to secure billions of dollars in ransom payments from the federal government. Parents aren’t going to forget what they saw when they had the opportunity to peer into the classrooms during remote instruction. Democrats and their allies can play definitional games and call the curriculum whatever they want, but at the end of the day, the teachers unions overplayed their hand and awakened a sleeping giant: parents.

Sen. Scott is correct that gaslighting is a losing strategy. But there’s more to this story. Republicans have a clear opportunity for political success going forward. For a long time, teachers unions have been the main special interest group when it comes to K-12 education — and those unions overwhelmingly donate to Democratic candidates.

According to the Virginia Public Access Project, for example, the nation’s two largest teachers unions contributed nearly a million dollars to McAuliffe in this month’s election. In fact, the American Federation of Teachers ran an ad in support of McAuliffe, and its president, Randi Weingarten, stumped for the former governor the night before Election Day. Meanwhile, these same groups contributed zero dollars to Gov.-elect Youngkin.

This position has been politically profitable for Democrats for decades, but overreliance on teachers unions puts them in a sticky situation today. Parents have emerged as a new special interest group, and Republicans are now in position to make education a winning issue. Democrats who have long opposed educational freedom find themselves in a catch-22: If they come out in favor of parental rights, they will get pushback from the teachers unions; if they come out against parental rights, as we just witnessed with McAuliffe, they will get pushback from parents and suffer for it at the voting booth.

McAuliffe’s biggest mistake was when he let the mask slip in the final gubernatorial debate by saying, “I don’t think parents should be telling schools what they should teach.” Perhaps because he didn’t want to upset his boss, Randi Weingarten, he then quadrupled down on his anti-parent stance in multiple major media appearances afterward and even had her speak at his final campaign event on election eve. The rest, as they say, was history.

The polling averages swung in Youngkin’s favor as Election Day approached, and the data suggest education helped the Republican. Fox News polling , for example, found that Youngkin gained 13 points of support among parents between its final two surveys, with Youngkin beating McAuliffe with parents by 14 points, 56% to 42%, in the last days of October. The final polling by Echelon Insights and Cygnal similarly found Youngkin winning with parents by 15 and 17 percentage points, respectively. Monmouth University polling found voters trusting Youngkin more than McAuliffe on education in mid-October, even though they found Youngkin was down on education 4 to 5 percentage points in August and September.

The Washington Post also noted the education shift favoring Youngkin revealed by their polling: “Education now rivals the economy, which 23% of likely voters named as their most significant issue. Youngkin has gained significant ground among those voters: In September, education voters favored McAuliffe by 33 points, but now they tilt toward Youngkin by nine points.”

Exit polling done by the Post found that 24% of voters said education was their top issue, making it the second most important issue in the race, behind the economy and jobs, and that Youngkin led McAuliffe by 6 points with those voters.

Supporting educational freedom is politically advantageous for other reasons as well. For one, it is often the case that politicians attended, and sent their children to, private schools. Candidates who support allowing education funding to follow the child can call out their opponents for being school choice hypocrites.

In fact, this “school choice for me, but not for thee” hypocrisy was another element of the Virginia governor’s race. McAuliffe vetoed nine school choice bills when he was governor in 2016 and 2017, and when talking about school choice on CNN this October, McAuliffe said , “I will never allow that as governor.” Yet the former governor exclusively attended private schools and sent his children to private schools. I’m glad his family had those opportunities. Every family should seek the best educational options for their children. And those exercising school choice shouldn’t fight against it for the less fortunate.

A nationwide poll conducted by RealClear Opinion Research in September found that 62% of voters said they would be less likely to vote for candidates who oppose school choice policies yet sent their own children to private schools. This result held across party lines as well, with 66% of Republicans, 65% of independents, and 56% of Democrats reporting that they would be less likely to support school choice hypocrites.

It appears McAuliffe knew his opposition to school choice was hypocritical . In an interview on NBC’s Meet the Press, he implied that he sent his children to public schools in Virginia. “Chuck,” McAuliffe said to the anchor, “we have a great school system in Virginia. Dorothy and I have raised our five children.”

Candidates in support of educational freedom can also highlight another major logical inconsistency held by their opponents: A lot of the same politicians who oppose funding individuals instead of institutions only reject the concept when it comes to K-12 education. Just think about it. We already fund students directly with Pell Grants for higher education. Pell Grants go to students who can take the funding to the public or private, religious or nonreligious, higher education provider of their choosing. The same goes for taxpayer-funded pre-K initiatives, including the federal Head Start program. We similarly don’t tell low-income families they must use their food stamp dollars at a residentially assigned, government-run grocery store. Instead, families can take that funding to just about any provider of groceries, including Walmart, Trader Joe’s, and Safeway. Ditto for Medicaid and Section 8 housing vouchers.

Why would anyone support funding people as opposed to buildings for everything else besides K-12 education? The difference is one of power dynamics. Choice is the norm with higher education, pre-K, and just about every other industry. But choice threatens an entrenched special interest, teachers unions, only when it comes to those in-between years of K-12 education. It would be wise for supporters of funding students instead of systems, and for Republican candidates who want to press their political advantage with parents, to call out this logical inconsistency going forward.

Advocates of parental rights have the wind at their backs. The latest nationwide RealClear Opinion Research polling found a 10 percentage point surge in support for school choice among registered voters over the past year, from 64% support in April 2020 to 74% support in June 2021. Another nationwide poll from Morning Consult found that 78% of the public supports education savings accounts , which are the gold-standard method of funding students instead of systems, in 2021. Real change is happening at the state level, too. Eighteen have enacted or expanded programs to fund educational choice for students this past year.

This is the year of school choice , and it’s not slowing down. Since Virginia’s election, over 200 lawmakers from over 25 states (and over 1,500 voters) have signed an Education Freedom Pledge to support policies promoting parental rights in education, such as “the right of parents to voice their opinions at school board meetings and to take their children’s taxpayer-funded education dollars to the education providers of their choosing — whether it be a public, private, charter, or home school.”

There will be no more hiding. Politicians are going to have to take a stance on parental rights from here on out. Parents are the new education special interest in town, and they aren’t going away any time soon. Politicians from all parties would be wise to take their side. After all, parents are going to fight for the right to educate their children as they see fit harder than anyone else will fight to take that right away from them.

Corey DeAngelis is the national director of research at the American Federation for Children, an adjunct scholar at the Cato Institute, and a senior fellow at the Reason Foundation.