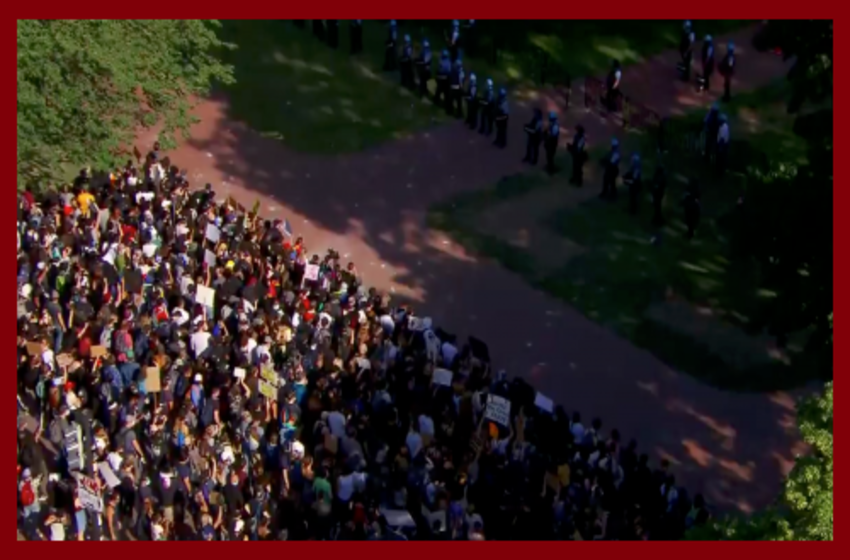 Park Police in D.C. are now disputing the narrative being pushed by the liberal media that tear gas was used to disperse peaceful protesters to make way for President Donald Trump to get to St. John’s Episcopal Church across from Lafayette Park, claiming that not only did they not use tear gas, but that the protesters in question weren’t exactly peaceful.

In a tweet thread, WTOP reporter Neil Augenstein says police said they used smoke, not tear gas, to break up a crowd because protesters were throwing objects at police, adding that the cops didn’t even know Trump would be coming across the park.

“A source says tear gas was never used — instead smoke cannisters were deployed, which don’t have an uncomfortable irritant in them,” Augenstein said. “And, the source says Park Police didn’t know President Trump would be walking across the park several minutes later.”

“Park Police say the reason the crowd was disbursed with smoke cannisters is that at that moment, officers were being pelted with water bottles,” he went on. “Another factor was that protesters had climbed on top of the structure at the north end of Lafayette Square that had been burned the day before.”

First on WTOP: U.S. Park Police is explaining its decision-making in clearing Lafayette Square, at least 20 minutes before DC’s 7p curfew, on night 4 of protests….

The media have widely reported that police tear gassed peaceful protesters to carve out a path for Trump to get to the church, where he addressed the mass riots that have left many U.S. cities reeling from violence, looting and arson. A New York Times headline claimed, “Protesters Dispersed With Tear Gas So Trump Could Pose At Church.” Multiple news outlets from local outlets to national news platforms ran with reports that the smoke plumes from the police were tear gas, and that the protesters were peaceful.

Following the reports, D.C. Mayor Muriel Bowser called the clearing of the park “shameful,” while the Episcopal Diocese of Washington slammed the president for coming to a church after officers cleared his path with tear gas.

“The President just used a Bible and one of the churches of my diocese as a backdrop for a message antithetical to the teachings of Jesus and everything that our church stands for,” Bishop Mariann Budde said in a statement. “To do so, he sanctioned the use of tear gas by police officers in riot gear to clear the church yard.”