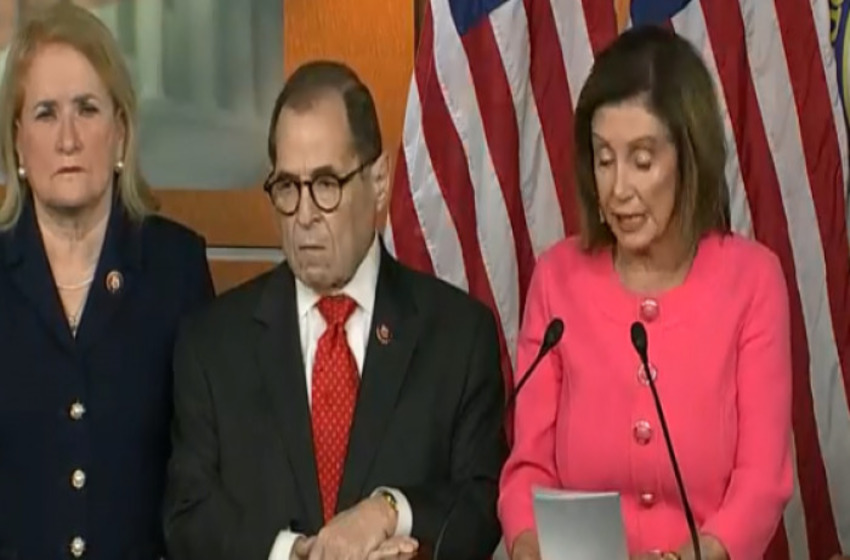 (CNSNews.com) – House Speaker Nancy Pelosi, invoking Abraham Lincoln, Thomas Paine, and even the poet Henry Wadsworth Longfellow, announced on Wednesday that “this is a very important day for us.”

She named seven impeachment managers — all of them litigators, she noted — including intelligence committee Chairman Adam Schiff (D-Calif.) and Judiciary Committee Jerrold Nadler (D-N.Y.). More on the seven managers in a moment.

At the top of her news conference, Pelosi aimed to explain why impeachment — once so urgent, then not so urgent as she withheld the articles for almost a month — is necessary and historic.

She emphasized the “importance of time,” and she repeated something she said on Sunday, that Trump’s impeachment “will last forever.” (He’s forever stained, in other words, regardless of what the Senate does.)

Here is Pelosi’s framing of the argument:

This is a very important day for us. As you know I referenced temporal markers that our founders and our poets and others have used over time to place us in time, to emphasize the importance of time, because everything is about time.

Because everything is about time — how we use it, how we mark it. And today is an important day because today is the day that we name the managers, we go to the floor to pass the resolution to transmit the articles of impeachment to the Senate, and later in the day, when we have our engrossment, that we March those articles of impeachment to the United States Senate.

As I’ve said, it’s always been our founders, when they started, “When in the course of human events it becomes necessary” — when.

Thomas Paine, ‘These are the times that try men’s souls.’

Again and again, even our poets, Longfellow — “Listen, my children and you will hear/Ofthe midnight ride of Paul Revere/On the 18th of April 1775/ Hardly a man is now alive/That remembers that famous day and year.”

It’s always about marking history, using time. On December 18th, the House of Representatives impeached the president of the United States. An impeachment that will last forever.

Since December 18th, there have been comments about when are we going to send the articles over. Well, we had hoped that the courtesy would be extended that we would have seen what the process would be in the Senate.

Short of that, the time has revealed many things since then. Time has been our friend in all of this because it has yielded incriminating evidence, more truth into the public domain.

Pelosi then recited some of the “evidence” that has come to light since the House moved its impeachment articles — evidence, she said, that “further proves the president was a central player in the scheme to pressure Ukraine for his own benefit in the 2020 election.”

The rest of the news conference was devoted mainly to pressuring the Republican-led Senate to call the witnesses and subpoena the documents that the House committees decided not to wait for.