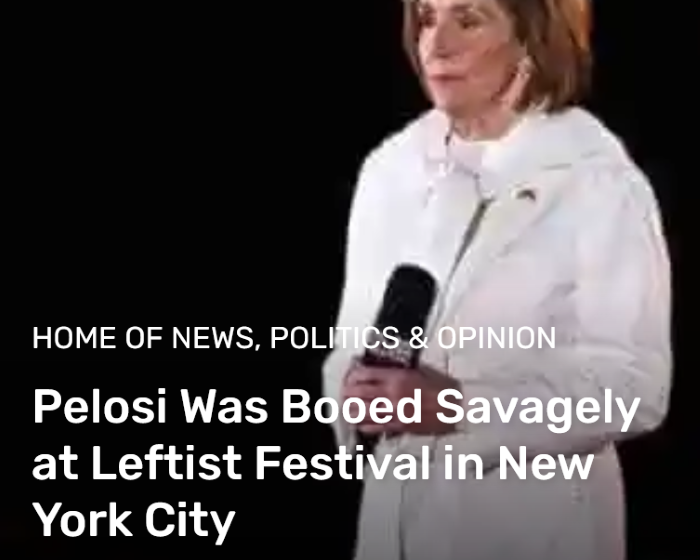 During a surprise visit, Speaker Pelosi was savagely booed at the Global Citizen Festival for climate change in progressive New York City. I have no idea why they booed. Maybe she’s not far left enough. Hopefully, they don’t want the country destroyed. We can only hope.

“As speaker of the house, I am here to thank you for your dazzling advocacy, entrepreneurial thinking, and determination as global citizens,” she told the crowd, according to the New York Post.

“It’s thanks to your help that the United States recently enacted historic climate legislation, which will be a game changer,” she added, drowned out by the crowd. “It will slash carbon pollution by 40% by 2030; it will give a historic, an historic $370 billion to fight the climate crisis.”

When my nephew graduated from Yale, Pelosi was the commencement speaker. The applause for the ignominious politician was loud and enthusiastic. What happened? Do they realize she’s evil?

It’s also true that fans are more based than musicians. Pelosi was trying to take about cutting emissions, and the crowd booed heartily. Her voice was shaky. She didn’t expect the boos.

Also, they live with inflation, wars, and open borders like everyone else. Despite Democrats’ best efforts to convince us the border issue is political, it’s not, and many Democrats realize it.

Nancy’s drunk husband doesn’t help her image. He was recently arrested for a serious accident while he was driving drunk. He has driven badly before and his brother died.

The New Yorkers will still mostly vote for Ds when push comes to shove.

NEW YORK: Nancy Pelosi @SpeakerPelosi gets BOOED by large crowd as she appears on stage at the Global Citizen festival to talk about climate change in Central Park. pic.twitter.com/yGPmaYZg6O

@JackPosobiec I was at the global citizen festival in Central Park Manhattan, and they brought Nancy Pelosi out and she got heavily booed. 😂 pic.twitter.com/MFT77wbWaT

These should be her peeps.

Nancy Pelosi gets booed at NYC “global citizens festival”
Watching a swarming of massive people that buy the concept of globalism mock one of the most prominent foot soldiers of the globalist elite is quite a sight to behold.pic.twitter.com/vBJGHlEZZP

Routine Booing of Pelosi & Cheers for ‘the Squad’ at Hard-Left ConventionJuly 14, 2019In “Home of News, Politics & Opinion”

#TrumpBooedAgain Uh, Not So FastNovember 3, 2019In “Home of News, Politics & Opinion”