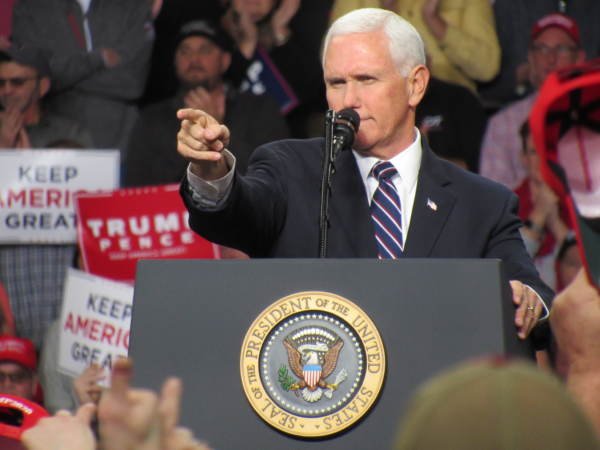 Vice President Mike Pence “welcomes” the challenge of electors by House and Senate Republicans, according to a statement by his Chief of Staff Marc Short reported Saturday evening by Axios’ Jonathan Swan, who posted the statement to Twitter. Pence will preside over Wednesday’s joint session of Congress to certify the Electoral College vote. Pence successfully fought off a suit this week brought by Rep. Louie Gohmert (R-TX) that sough to nullify part of the 1887 Electoral Count Act so that Pence could exercise authority to accept or reject Electoral College votes rather than the largely procedural role spelled out in the act.

VP Chief of Staff Marc Short: “Vice President Pence shares the concerns of millions of Americans about voter fraud and irregularities in the last election…The Vice President welcomes the efforts of members of the House and Senate to use the authority they have under the law to raise objections and bring forward evidence before the Congress and the American people on January 6th.”

“The Vice President welcomes the efforts of members of the House and Senate to use the authority they have under the law to raise objections and bring forward evidence before the Congress and the American people on January 6th.” 2/2

Sen. Josh Hawley (R-MO) announced on Wednesday he would support a challenge to Biden electors being led by Rep. Mo Brooks (R-AL) on January 6 when Congress meets in a joint session to certify the votes of the Electoral College. Reports state about 140 GOP Congressmen will join with Brooks. So far about three dozen have publicly announced they will challenge electors.

Earlier Saturday Sen. Ted Cruz (R-TX) announced he and a group of Senators and Senators-elect plan to challenge the certification of Biden electors from certain states on Wednesday if their call for the immediate appointment of a commission to study the election–as was done for the 1876 presidential election–is not met. The statement also said they group would not vote to certify the electors until the commission reported back on a ten-day deadline, “Accordingly, we intend to vote on January 6 to reject the electors from disputed states as not ‘regularly given’ and ‘lawfully certified’ (the statutory requisite), unless and until that emergency 10-day audit is completed.”