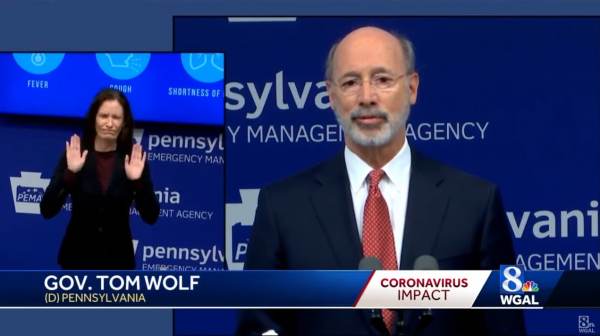 Governor Tom Wolf, D, Pennsylvania, is popping his lid at the notion that counties are planning on opening up without his approval and in defiance of his orders. In the minds of the democrats, only they are allowed to decree when businesses are allowed to operate. In fact, Governor Wolf is vowing to withhold funding from these counties.

Wolf is somehow framing this as an act of “surrender” and “cowardice.” Because somehow in the minds of the democrats it’s brave to stay quarantined in your own home.

The revolt by a dozen or more Pennsylvania counties who are opening up their businesses against the dictatorial edicts of Democrat Governor Tom Wolf has apparently thrown him into a blind rage, which was further exacerbated by a Tweet from President Trump in support of Pennsylvania patriots and a news conference by State Senator and gubernatorial aspirant Doug Mastriano, in which he called for the resignation of the incompetent Health Secretary Rachel Levine.

Wolf attacked business owners who reopen from coronavirus shutdowns before they are allowed and the politicians who have encouraged them, calling them “cowardly”, threatening serious consequences to both groups.

“These folks are choosing to desert in the face of the enemy, in the middle of a war that Pennsylvanians are winning and must win,” said Wolf, seemingly angry at times, at a press briefing.

Pennsylvania Insurance Commissioner Jessica Altman stated that companies that ignore Wolf’s edicts could be jeopardizing their insurance coverage and putting themselves at risk of having their claims denied, adding that many policies have provisions that exclude coverage stemming from “illegal acts or conduct,” and could result in denied claims for property damage, protection from liability and other hazards should a business decide to reopen in violation of Wolf’s order.