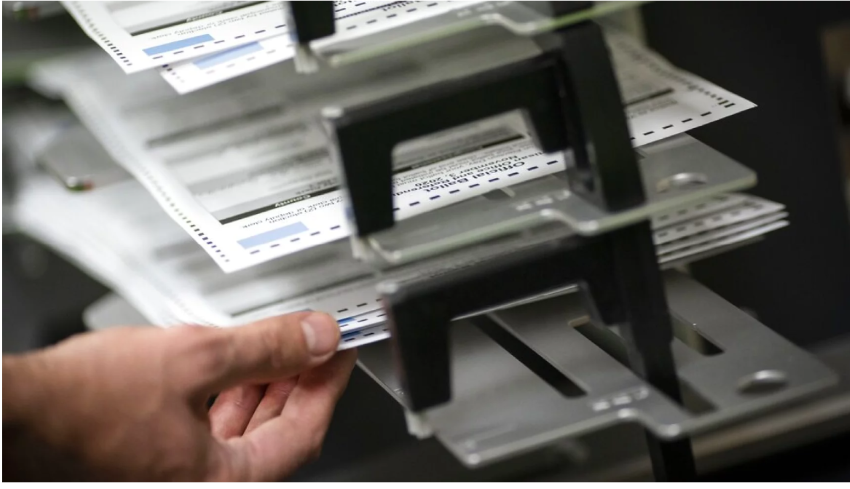 Officials from Pinal County, Arizona, said they aren’t completely sure what went awry during the primary election Tuesday, when at least 20 precincts reported ballot shortages at polling locations, prompting the Republican Party to raise concerns.

A scramble is underway to determine why precincts had not been given an adequate amount of ballots in advance of the election and are open to conducting an audit to get to the bottom of what went wrong, two county officials said during a press conference Wednesday.

“We opened the boxes, and there weren’t enough ballots … so we’re not really quite clear how that occurred,” said Jeffrey McClure, chairman of the Pinal County Board of Supervisors.

During primary night, a number of voters were told their polling station ran out of ballots and were offered the opportunity to wait or come back at a later time after the county printed out more ballots. Officials said they are not sure how many voters were affected by the shortage and emphasized that not all of the roughly 20 precincts that requested additional ballots ran out.

Pinal County Attorney Kent Volkmer acknowledged that the chaos in the county could fuel conspiracy theories about election malfeasance in the state. He pleaded for voters and the general public to judge the county by its actions going forward and vowed to take action to ensure a similar ballot fiasco will not take place in the future.

“There is nothing sinister — it wasn’t as if we said, ‘Hey, this is only going to impact a Republican. … This was widespread. It was equal opportunity. It was just simply a mistake,” Volkmer pleaded.

Roughly 2.5%, or about 25 of the 900-plus types of ballots in the county, were affected by the shortage, according to Volkmer. Demand for those types of ballots apparently exceeded the county’s anticipation. Volkmer surmised that the problem stemmed from spoiled ballots in which constituents demanded more than one ballot due to a mistake, a recent uptick in the county’s population, and an unanticipated amount of independent voters that request a primary ballot.

Volkmer cast doubt on claims that staffing shortages caused the problem and indicated that the chaos was likely the result of human error. The county has no authority to call for a redo of the election — that power lies with the state government and courts, he added.

“This is a comprehensive failure that disenfranchises Arizonans and exemplifies why Republican-led efforts for transparency at the ballot box are so important,” the duo said in a joint statement. They also said Pinal County Elections Director David Frisk, who took over the county’s elections in March, “should resign immediately.”

Arizona, particularly in Maricopa County, has already become a hotbed for election fraud claims after the 2020 contest. Some candidates running in this cycle, including Trump-backed gubernatorial candidate Kari Lake, have cast doubt on the integrity of the 2020 election.

There are still several outstanding races in Arizona, including the Republican primary for governor, though Lake has already declared victory. Still, Lake has already said there were “major issues” in the Arizona primary.

At a press conference today after her win, Kari Lake says there was election fraud. pic.twitter.com/YPyJwNpsdv

McClure promised that the county is hard at work to address the problem and will make changes. He even suggested that the county might consider appointing a new election director but stopped short of making a hard commitment to that.

“We’re looking at restructuring the way we do our elections department. And that’s in the conversations,” he said. “We have to look forward to that. We have to figure out the problems that we just had, quickly, and we have to move forward and be positive about it.”

Both Volkmer and McClure acknowledged that they are not entirely sure how the debacle could have affected the election. Volkmer stressed that any voter who arrived at a polling station before the deadline was allowed to vote and cited an example of one polling station that did not close until over an hour and a half after 7 p.m. closing time.