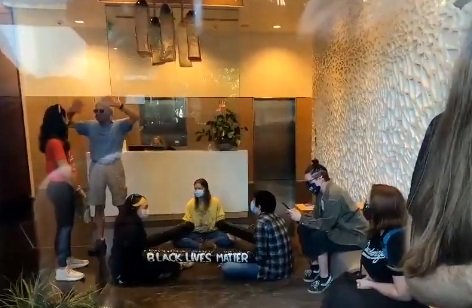 Proving once again that pandering to the mob won’t save you, Portland Black Lives Matter militants have now chained themselves together in far-left Mayor Ted Wheeler’s apartment building lobby.

As Mayor Wheeler was tweeting platitudes about the Black Lives Matter movement, the mob was gearing up to target his home.

and the countless systemic institutional disadvantages that have shaped anti-Black sentiments are part of our reality. I ask to stand locked arm and arm with you.

It turns out his endless support for the terroristic movement is not enough.

Three Black Lives Matter protesters have locked arms and are refusing to move from the lobby of Mayor @tedwheeler‘s apartment building. #PortlandProtestspic.twitter.com/LACj5Bqdnt

A protester tries to get into Mayor Ted Wheeler’s apartment building where three activists have locked arms. “I got white people shit to do in there!!” pic.twitter.com/2UumWkDOM7

In July, Mayor Wheeler was attempting to pander to the rioters by attending their violent “protest.” He refused to leave even when alerted that it had been declared a riot and that tear gas would be deployed, despite the rioters being hostile towards his presence.

The sit-in at Wheeler’s home is ongoing. The Gateway Pundit will provide updates if the situation escalates.