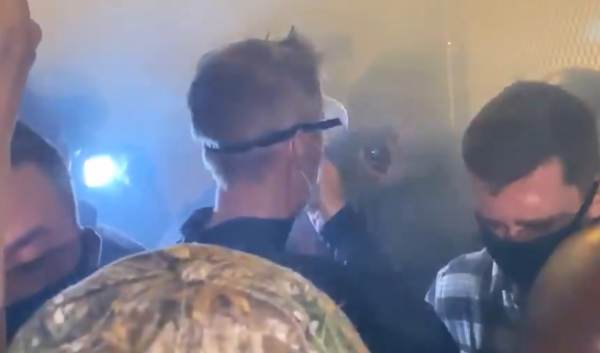 Vichy Portland mayor Ted Wheeler decided to attend the protests on Wednesday evening. After getting yelled at for the better part of an hour by crazed leftists, he walked over to the big fence that lines the federal courthouse, to join the protesters there.

As usual, the rioters broke through the fence, set several fires, and launched fireworks at building.

Ted wheeler is watching this #AntifaTerrorists#PDXProtestpic.twitter.com/2GxmtfFYm8

DHS is not the problem. #AntifaTerrorists#PDXProtestspic.twitter.com/Hmy7LzFHG4

Wheeler was personally watching the fires:

Then the feds started launching chemical agents of some kind:

Wheeler w bombs and gas going off right in front of him. pic.twitter.com/OsPddaXJfL

Wheeler still taking lots of gas and flash bangs and standing firm. I’ve had to walk away twice to recover. pic.twitter.com/EyJFsHX1ri

Wheeler was still getting debris lobbed at him from the communists. Yet he still has the gall to defend the rioters and blame Trump. He claims he saw nothing that warranted that type of response from the feds:

Either Wheeler is blind or he has selective amnesia. Does he not see the fires burning? Did he not see the people climbing over the fence to storm the building? Has he not seen the countless examples of rioters trying to barricade the doors to the