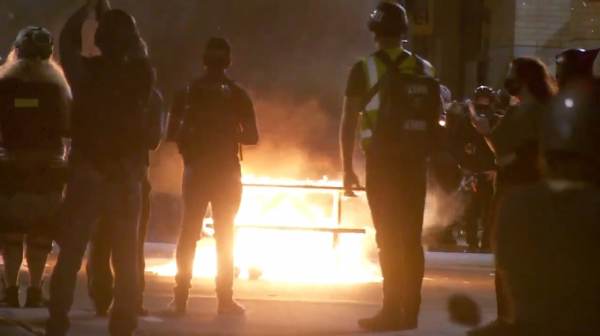 As calls for vichy Portland “mayor” Ted Wheeler to resign increase, the rioters have once again taken to causing a scene out front of his condo in the ritzy Pearl District. This time they smashed out the windows and tried to set the place on fire. Evidently this was the mayor’s birthday, and this was the party antifa threw for him.

A protestor threw a firework inside the lobby pic.twitter.com/h0R2DZzOoH

Using bats, antifa black bloc rioters are smashing up property around @tedwheeler’s Portland condo. There have been no police at all tonight per Wheeler’s directive of “deescalation.” #PortlandRiots#antifapic.twitter.com/D0RtQtGL6j

Turns out the fire was set in doctor’s office on the first floor of the building, which happens to be minority owned.

The terrorists eventually settled on lighting another picnic table on fire in the street. Because lighting enough picnic tables on fire will somehow put an end to police brutality.

A bonfire is burning on the intersection. The crowd is chanting “F*ck Ted Wheeler!”. #PortlandProrests#PDXprotests#BlackLivesMatterpic.twitter.com/nMqPlc3d4v

Since it’s at the mayor’s house, *SOMEONE* ordered the police to rush in and put an end to the party. One riot cop comes storming in, tackles a non gender specified particular individual to the ground, and starts wailing away after the rioter flips the cop’s helmet off his head.

A police officer runs ahead of his line, tackles a protester, and starts