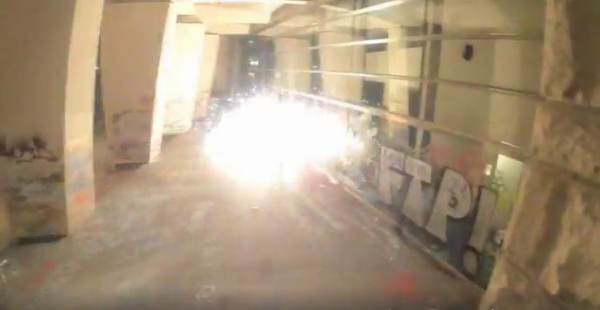 Fireworks exploding on the steps of the Hatfield Federal Courthouse in Portland, Oregon

While most cities have either gotten back to mostly normal or have at least seen a dramatic decrease in protest and riot activity, the jobless cretins who infest Portland have been at it every night for over six weeks now. At best, these “protests” devolve into “unlawful assemblies” before police clear them. At worst, they are declared riots and police end up making several arrests.

The US Flag is being burned on the former elk statue on Chapman Square. #PortlandProtests#PDXprotest#BlackLivesMatterpic.twitter.com/17O1PNo1r7

Over the last few nights, the rioters have targeted the federal courthouse, launching mortars and fireworks at the building in an attempt to set it ablaze. A Portland Police official press release reads:

A group of a couple hundred demonstrators gathered near the Justice Center on July 2, 2020. The group blocked the streets, chanting and speaking for several hours. Several demonstrators shot off commercial grade fireworks during the speeches. The tenor of the group shifted when demonstrators broke in to the north side doors of the Justice Center located on Southwest Main Street. Soon after, the group moved back to Southwest 3rd Avenue and broke glass doors on the Federal Court House building.

Around 11:42 p.m., Federal officers inside the courthouse came outside to protect the integrity of their building. While federal officers were outside, demonstrators began launching projectiles at the officers with sling shots. These projectiles included large rocks, full cans, and bottles. Demonstrators also threw lit commercial grade fireworks, which landed inside the broken glass doors of the federal courthouse. Simultaneously, demonstrators began setting a fire nearby on Southwest Main Street.

The sound truck made an admonishment telling demonstrators that they must cease the criminal activity of throwing projectiles and fireworks. Demonstrators were also warned if they did not cease the illegal actions and back away from the building, they would be subject to use of force, to include crowd control munitions. Even though the demonstrators were given several warnings by the sound truck, their criminal actions continued.