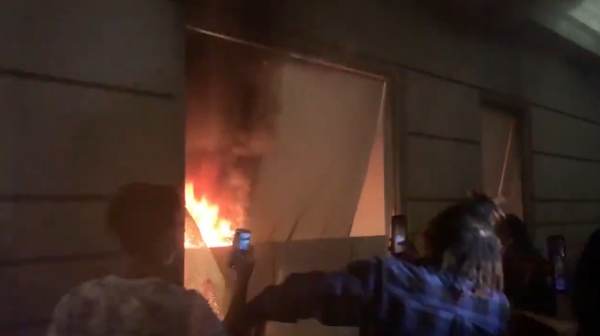 Not wanting to be outdone by the riots in Minneapolis and Atlanta, terrorists in Portland had their turn to destroy their city. Rioters stormed the Justice Center, which houses the police headquarters, preliminary court rooms, and the main county jail. Once they broke inside, they started looting and destroying the place. Then they set fire to the building, as smoke billowed from the shattered windows.

Pioneer Place mall was then looted:

It looks like rioters have gotten into Pioneer Place #koin6newspic.twitter.com/L7DD7jYl3f

Then the terrorists started setting fires in the streets:

On KOIN 6’s live feed, reporter Jennifer Dowling mentioned that she hadn’t seen any police until after the Justice Center was set on fire.

Portland, this is NOT us. When you destroy our city, you are destroying our community. When you act in violence against each other, you are hurting all of us. How does this honor the legacy of George Floyd? Protest, speak truth, but don’t tear your city apart in the process.

Apparently there was some kind of shooting related to the riots.

The Justice Center has been attacked and a fire has been lit inside. @pdxfire is on scene.

At one point earlier in the day a car plowed over some of the protesters.

A car struck a protester at the corner of Grand and Shaver while a crowd marched to protest #GeorgeFloyd’s killing.