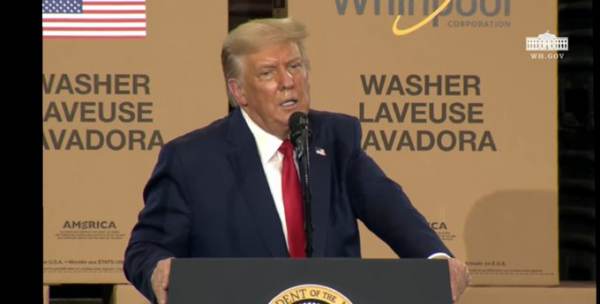 President Trump spoke to workers at a Whirlpool factory in Clyde, Ohio Thursday to tout his efforts to restore America’s manufacturing base. During the speech Trump also spoke about his working to reform prescription drug pricing by the pharmaceutical industry.

While speaking about reducing drug prices by cutting out the middlemen, Trump said he had made a lot of enemies, rich enemies, and that “This might be the last time you’ll see me for awhile.”

“…So I have a lot of enemies out there. This may be the last time you’ll see me for a while. A lot of very, very rich enemies, but they are not happy with what I’m doing. But I figure we have one chance to do it, and no other President is going to do what I do. No other President would do a favored nations, a rebate, a buy from other nations at much less cost. Nobody. And there are a lot of unhappy people, and they’re very rich people, and they’re very unhappy.”

TRUMP: “So, I have a lot of enemies out there right now. This might be the last time you see me for awhile. A lot of very very rich enemies and they are not happy with what I am doing.” pic.twitter.com/Fvwko4Rac9

Transcript via the White House:

And speaking of pharmaceuticals, we instituted four moves — rebates, favored nations, and other things — buying from other nations where they have the product — the same exact pill, identical; made in the same factory — for a fraction — just a small fraction of the cost. We buy from other countries, as opposed to buying through this ridiculous quagmire of political scam that we’ve been going through for many years.

And what I’ve done, in terms of favored nations, if — as an example, Germany has a pill for 10 cents and we have a pill for $2. We institute favored nations on the drug company. We get the pill for the same amount as the lowest pill anywhere in the world. Anywhere in the world. (Applause.) And that could drop your price of pharmaceuticals, of drugs — prescription drugs — it could drop your price 50, 60, 70 percent, maybe more than that.

This is something — now, I have to tell you, I have never seen so many bad commercials about me as in the last three days since I did this. (Laughter.) So, will you remember that when you see this horrible commercial that I’m a “socialist” — I was called a “socialist” for the first time in my entire life. (Laughter.) Actually, what I am