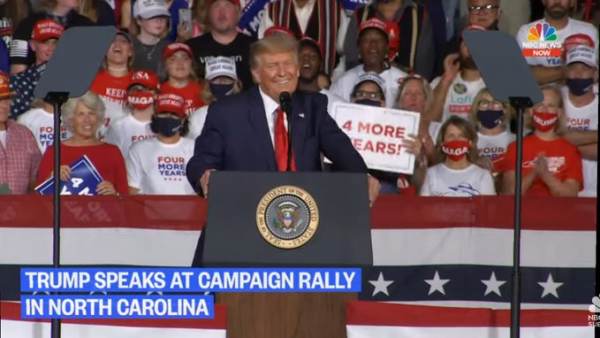 President Trump was momentarily overwhelmed by the chants of “We Love You!” by thousands of supporters at a rally in Winston-Salem, North Carolina Tuesday night. 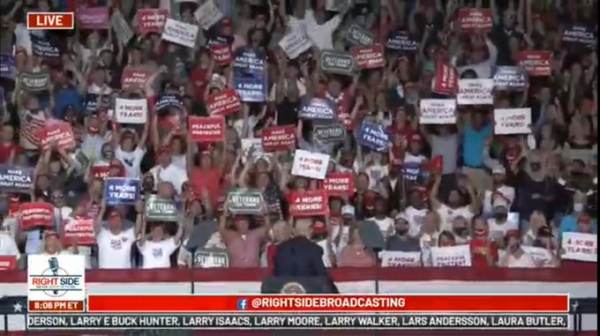 President Trump grins and then turns to face supporters chanting, “We love you!” at rally in Winston-Salem, North Carolina on Tuesday, screen images.

Chairman of the GOP in North Carolina Michael Whatley estimated the attendance at 15,000.

Amazing night in Winston-Salem. Over 15,000 turned out to welcome @realDonaldTrump back to North Carolina – which is absolutely Trump Country! #FourMoreYears#MAGA#NCGOPpic.twitter.com/A1waSLK0vH

The outdoor airport rally was staged on the tarmac of Smith Reynolds Airport, rather than in a hangar. Trump’s previously rally held last week at the Arnold Palmer Airport in Latrobe, Pennsylvania was held in a hangar that could only hold a few thousand supporters. That rally had an overflow crowd on a nearby airport property that was larger than the crowd in the hangar. President Trump and his campaign team apparently adjusted their planning to accommodate large airport rally crowds by holding this next rally on the tarmac.

Video of Trump’s arrival posted by Dan Scavino shows the huge crowd on the tarmac. Trump did an unusual long walk to the stage so that he and the people in the back could make direct contact.