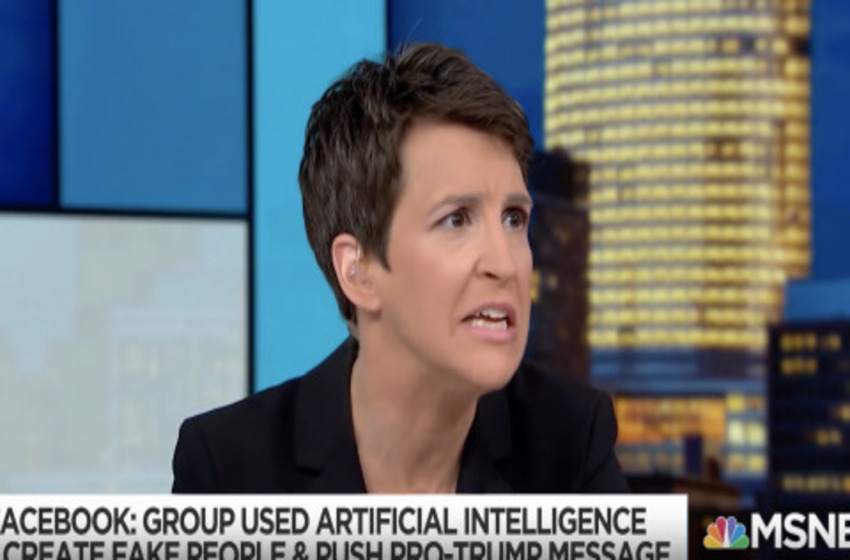 It’s tempting to view MSNBC Talk-Garrot Rachel Maddow as the Dinosaur Media’s Lucy Van Pelt, but, of course, that would be an insult to Lucy.

So, while it’s easy to get Lucy and Rachel confused, after a bit of study, it becomes clear that one is much more cartoonish than the other, and that fact just became more obvious as Maddow’s attorneys offered part of her defense in a $10 million defamation suit she’s currently fighting.

As Chris Gregory reports for Culttture:

One America News (OAN) is in court against MSNBC‘s Rachel Maddow in a $10 million lawsuit after Maddow said her conservative competitor “really, literally is paid Russian propaganda.”

And we all know that Ms. Maddow is a lot brighter than the rest of us, so she clearly has a better handle on the meaning of the word hyperbole and the difference between “literal” and “figurative” than we do. She’s been on the cutting edge of true, honest reporting for years, and would never err or become hyperbolic when making statements about OAN, right?

According to The Times of San Diego:

Maddow lawyer Theodore J. “Ted” Boutrous Jr. argued that the liberal host was clearly offering up her ‘own unique expression’ of her views to capture what she saw as the ‘ridiculous’ nature of the undisputed facts.

‘Her comment, therefore, is a quintessential statement ‘of rhetorical hyperbole, incapable of being proved true or false,’ he said.

In fact, why, even in Mr. Boutrous’s legal filing, does it appear as if he is doubling-down on the defamatory claim even as he says what Maddow herself said cannot be proven or disproven?

Seriously, check this out.

First, Mr. Boutrous claims that Lucy – er, Rachel – was offering her “own unique expression” of her own views, but then he says that the claim about OAN being “literally paid Russian propaganda” is an “undisputed fact”. But THEN he says that her statement is not fact, but “rhetorical hyperbole, incapable of being proven true or false.”

Holy smoke. This lawyer sounds like a snake oil salesman giving the slip to one of his dupes. Perhaps he’s unaware of the fact that her words are on record. This is not a case of guilty until proven innocent. It’s a case of her claiming OAN is “literally paid Russian propaganda” without presenting evidence to support her defamatory claim. That’s why OAN has taken her to court.

In fact, like Mr. Boutrous, Maddow doubled-down on her claim on her program, saying this about OAN:

Their on-air politics reporter (Kristian Rouz) is paid by the Russian government to produce propaganda for that government.

Are we to take that as hyperbole, Mr. Boutrous, or as “undisputed fact” backed by nothing, which is what seems to be your implication in the legal filing?

This doesn’t look good for a self-righteous “news” woman who has already made herself such a laughing stock among people who care for facts that her program has been dropping in ratings like a planetoid caught in the pull of a black hole.

But what is one to expect? After all, this is the woman who in 2016 claimed that a speech by Donald Trump could be a “gateway drug” for the Ku Klux Klan (you know, that organization mostly run by Democrats in the late 19th and early 20th centuries) and who quite sarcastically misrepresented the crowd size and content of the Donald Trump Inauguration in 2017. This is not only a woman who’s love of sarcastic posturing seems to outdistance any interest in facts, this is a woman whose parsimonious relationship with actual truth is so clear, her attorney argues that she’s not to be taken seriously when she appears on the air making reckless claims about other news organizations.

Heck, this is the woman who in 2017 blustered about having “Trump’s Tax Returns”, implying that there would be bombshell evils revealed, when, in fact, as MRCTV’s Brittany Hughes reported at the time:

What Maddow and the fine folks over at MSNBC actually managed to do was get part of a copy of Trump’s 2005 tax return. Which was already 12 years old. And which the White House had already released… And which the Wall Street Journal had already reported on – a year ago.

So now, what is one to think of the mighty Rachel Van Pelt? Are we to take her seriously, as her “wink-wink-nudge-nudge-you’re-smart-I’m-smarter” schtick implies? Or are we to take at least a portion of her lawyer’s words to heart and realize we’re not to accept anything she says as true?

One thing is certain. When watching, hearing, or reading the propagandistic claims of Ms. Maddow, one can hear echoes of Shakespeare’s Macbeth. It seems as if Rachel’s bluster is simply “full of sound and fury, signifying nothing.”