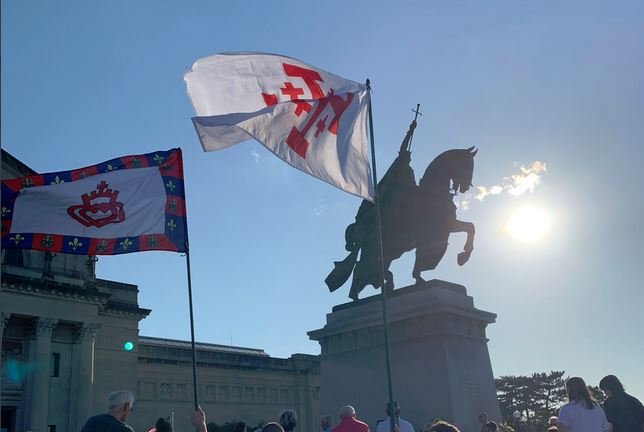 In June radical far left activists in St. Louis called on local officials to remove the historic St. Louis statue in Forest Park and to rename the city.

Then two weeks ago The Gateway Pundit called on local Christians to come together for a prayer rally at the statue of St. Louis in Forest Park.

This was in response to recent efforts by local radicals and Islamist activist Umar Lee to remove the St. Louis statue in Forest Park.

When we arrived for a prayer rally at the St. Louis statue in Forest Park we were met by a very violent, raucous, disrespectful mob of Black Lives Matter activists and leftist radicals.

Local radical leftists smeared our prayer rally as a white nationalist event and KKK meeting knowing this would put our Christian group in mortal danger.

Let me just say this was one of the most frightening gatherings I’ve ever attended as a writer and conservative activist in 16 years.

We posted this video earlier following the rally and the violence that took place against Christians when we left the area.

After most of the Catholics and Christians left the area three Catholic men were viciously beaten by the far left group that remained at the statue.

Catholics have been praying every night at the St. Louis statue at 6:30 PM for over two weeks now.

St. Louis Catholics continue to say the rosary nightly at the St. Louis Statue in Forest Park. They end their prayers with a procession of Mary. pic.twitter.com/bH45yHwMiR

On Sunday night the radical left is calling on supporters to come armed when they harass Christians at their daily prayer rally.

And, once again, they are accusing praying Catholics of being White Nationalists.

Umar Lee lies and says the “interfaith prayer group have been organizing meetings for months.

Please join us at 7 at the Monument if you want to shut the racists down. Event begins at 8.

Please join us at 7 at the Monument if you want to shut the racists down. Event begins at 8.

@SLMPD, Umar Lee is broadcasting LIVE from Art Hill. On the broadcast Lee says he is responsible for security of an upcoming event & takes responsibility for organizing the event on June 27th along with Moji Sidiqi & Ben Poremba! Ms. Sidiqi is present, on video, at the assaults. pic.twitter.com/cDEH1gz1d0