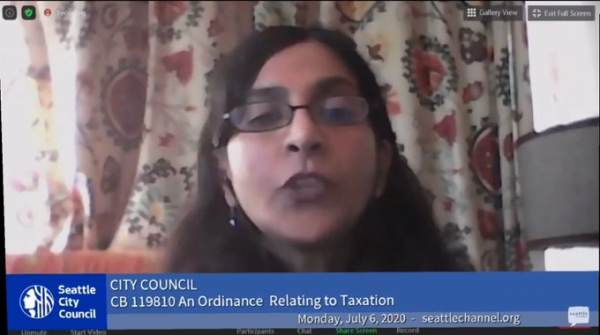 Communist Seattle City Councilmember Kshama Sawant (Socialist Alternative) gave a victory speech Tuesday night after passage by the city council of the so-called Amazon Tax in which she vowed to overthrow the United States, replacing the government and society with a “socialist world”.

Sawant, 46, immigrated from India as an adult with a B.S. in computer science from the University of Mumbai received in 1994. Once in the U.S., Sawant earned a Ph.D in economics from North Carolina State University and became a U.S. since 2010. Sawant has served on the Seattle City Council since 2014.

Lest anyone think this is hyperbole, here is the close of Sawant’s speech:

We are coming to dismantle this deeply oppressive, racist, sexist, violent, utterly bankrupt system of capitalism, this police state.

We cannot and will not stop until we overthrow it and replace it with a world based instead on solidarity, genuine democracy, and equality – a socialist world.

Before Sawant vowed to over the the United States, she threatened Amazon owner Jeff Bezos “and his class”, saying “we are coming for you and your rotten system.”

I have a message for Jeff Bezos and his class.

If you attempt again to overturn the Amazon Tax, working people will go all out in the thousands to defeat you.

And we will not stop there.

Because you see, we are fighting for far more than this tax, we are preparing the ground for a different kind of society.

And if you, Jeff Bezos, want to drive that process forward by lashing out against us in our modest demands, then so be it.

Because we are coming for you and your rotten system.

Video and full text of speech:

Text of speech via Socialist Alternative:

Speech delivered by Socialist Alternative member, and Seattle City Councilmember Kshama Sawant during a historic City Council meeting that passed a $200+ million tax on the top 3% of corporations to massively expand affordable housing.

Today’s vote to pass an Amazon Tax in Seattle is a historic victory for working people.

This victory was hard fought and it was hard won.

By a movement that wouldn’t give up, and that faced down a seemingly endless series of obstacles: from the shameful attempts of corporate