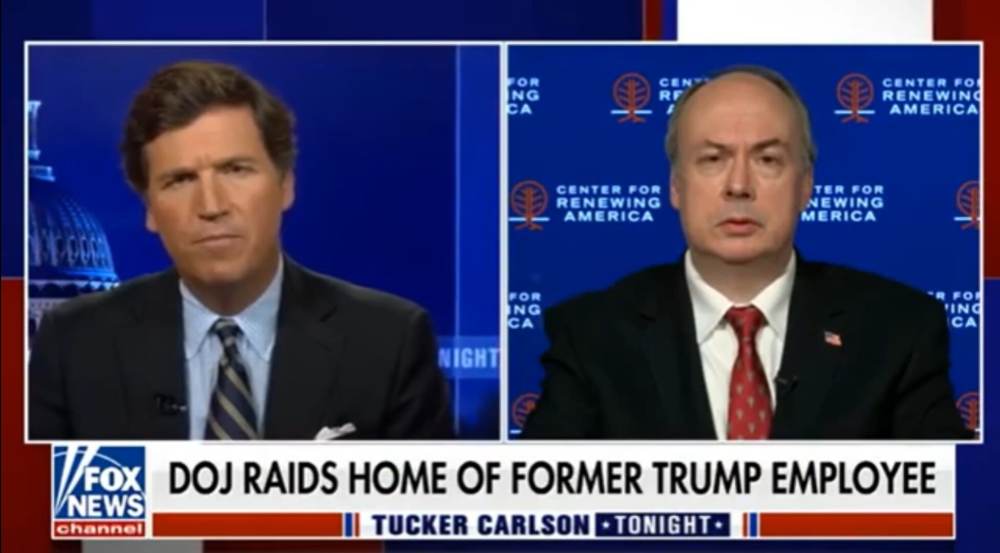 Former Trump Department of Justice Assistant Attorney General Jeffrey Clark appeared on Tucker Carlson Tonight on the Fox News Channel Thursday night to talk about the dawn FBI raid on his Northern Virginia home Wednesday. Clark said the agents made him go outside in his pajamas while they searched his house. Clark said twelve FBI agents, two Fairfax County police officers and an ‘electronic sniffer dog’ searched his house for over three hours. All his electronic devices were seized.

Clark said the raid was part of nationwide “Stasi-like” raids by the FBI on Republicans involved in helping President Trump to stop the steal of the 2020 presidential election.

Local news reports out of Nevada and Pennsylvania as well as the Washington Post, confirm the nationwide action by the feds.

“At what point can we say the Department of Justice, where you once served, is a political instrument, it’s completely out of control?” Carlson asked.

“Yeah, I think this is highly politicized and it’s also part, Tucker if you didn’t know it, of a nationwide effort yesterday,” Clark replied. “There were multiple states where multiple people were roughly simultaneously raided for their electronic devices. And that obviously requires a high level of coordination.”

Agents seized the cell phone of state Republican chairman Michael McDonald, reportedly as part of an investigation into the fake elector scheme initiated at the end of the 2020 presidential election.

A second search warrant was issued for state party secretary James DeGraffenreid, who also signed the document, but FBI agents could not locate him Wednesday, sources told Knapp.

In December 2020, the 8 News Now I-Team reported the Nevada Republican Party’s six electors signed paperwork signaling their support for former President Donald Trump in a symbolic ceremony devoid of any legal merit, which was held in Carson City and coincided with the official state-sanctioned tally on Dec. 14, 2020.

KLAS reported Thursday, “ELECTION INVESTIGATION: FBI agents are tracking down all six of the Nevada GOP’s electors as part of a federal investigation, sources tell the 8 News Now I-Team #8NN”