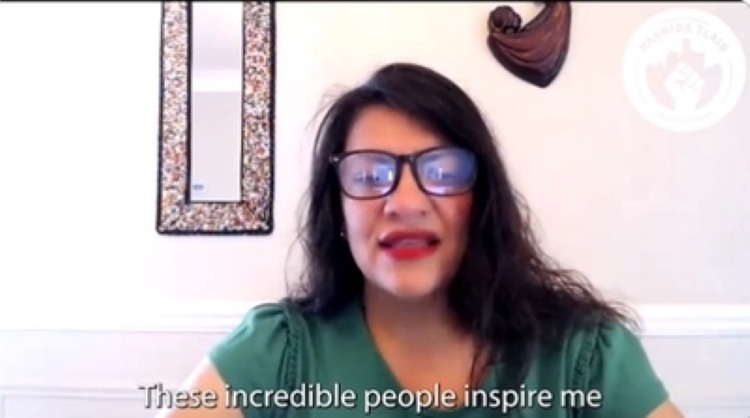 When U.S. Rep. Rashida Tlaib argued last month that true progressives cannot “back Israel’s apartheid government,” she and her supporters insisted it wasn’t an antisemitic statement covering the vast majority of American Jews.

As I noted at the time, however, the Michigan Democrat’s previous statements show her problem is not with the Israeli government, but with the existence of the Jewish state.

She again made that clear last week in a video praising six Palestinian charities Israel shut down in October 2021 due to their ties to Popular Front for the Liberation of Palestine (PFLP) terrorists.

“These incredible people inspire me every single day,” she said, “and countless others, with their dedication and their courage to shine the light on the horrors of Israel’s apartheid government despite the extremely serious risks.

“Criminalizing and targeting their work is a cowardly attempt to hide the truth, and I know it will fail, because there are too many of us speaking truth to power.”

The video was part of a campaign dubbed “Stand with the six” and was posted by one of the designated groups, Al-Haq.

But there’s a truth out there that Tlaib overlooks.

For example, Al-Haq director Shawan Jabarin’s PFLP ties have been publicly known at least since 2007. That’s when Israel’s Supreme Court upheld a travel ban against him, with one judge saying, “Some of his time is spent conducting a human rights organization, and some as an operative in an organization which has no qualms regarding murder and attempted murder, which have no relation whatsoever to rights. Quite the opposite, they reject the most basic right of all, without which there are no other rights, the right to life.”

In a November 2021 report, the Washington Institute’s Matthew Levitt detailed similar links between “the six” and the PFLP. Jabarin is not the only PFLP member working with one of the proscribed organizations. Other senior officials have their own connections, and the groups “routinely hire known PFLP operatives, including those convicted of terrorist plots and of being PFLP operatives,” the report said.

Israeli officials told Levitt that an employee at the Health Work Committees told police that “the PFLP-affiliated institutions are interconnected and serve as the organization’s lifeline financially and organizationally, i.e., money laundering and financing PFLP activity.”

A 2019 report by Israel’s Ministry of Strategic Affairs and Public Diplomacy, Terrorists in Suits, explains that “Hamas and PFLP operatives have infiltrated and adopted seemingly benign NGOs in the Palestinian Authority, Europe, North America and South Africa, for the purpose of advancing their ideological goal: the elimination of the State of Israel as the nation-state of the Jewish people. Moreover, it appears that terrorist organizations view NGOs in the West as a convenient means for raising funds which they could not otherwise obtain.”

Despite publicly available information, Tlaib doesn’t seem to consider that “the six” might serve violent agendas.

“These six organizations are on the front lines on the fight for human rights, justice and equity against the forces of violence, apartheid and hate,” she said in the Al-Haq video.

While the idea may seem difficult to grasp, there is a fairly deep history that some charities which claim to serve humanitarian missions actually are part of terrorist networks. In the United States alone, the Holy Land Foundation for Relief and Development (HLF) – once the country’s largest Muslim charity – and the Islamic Committee for Palestine were considered legitimate until evidence reveled their respective ties to Hamas and the Palestinian Islamic Jihad (PIJ).

HLF was part of a Muslim Brotherhood network in the United States once led by Mousa Abu Marzook, a senior Hamas political operative who lived in the United States until he was deported in 1997. Its fundraisers routinely featured speeches from Hamas officials, and songs praising the terrorist group, including this one, in which singers call on Hamas to “teach us the rifle … raise the banner of jihad,” and says “the victory of God is by martyrdom.”

An internal document listed all the Palestinian charities HLF worked with, defining the depth of Hamas control in each. “All of it is ours” several entries said.

At the charity’s trial, supporters protested outside the Dallas federal courthouse, carrying banners that read “feeding children is not a crime.”

True. But giving money and other forms of support to a U.S. designated terrorist organization is.

The ICP was created by Sami Al-Arian, who worked as an engineering professor at the University of South Florida in Tampa. Although he helped secure a visa for Ramadan Abdullah Shallah, who went on to lead PIJ from 1995 until 2018, Al-Arian vehemently denied he or his charity had any terrorist connection.

But the relationship was clear in more intimate settings. During a 1991 speech at an ICP fundraiser in Cleveland, Al-Arian was introduced as the head of “the active arm of the Islamic Jihad Movement in Palestine. We preferred to call it the ‘Islamic Committee for Palestine’ for security reasons.”

“And whoever wants to write a check, he can write it in the name of the Islamic Committee for Palestine, ‘ICP’ for short.”

In the wake of a double suicide bombing by the PIJ four years later, Al-Arian wrote a letter soliciting money “so that operations such as these can continue.”

This all happened before Tlaib was a public figure. It is not difficult to imagine, however, that she would have likely stood by both Palestinian “charities” in the same way she is standing by the PFLP-connected ones.

Tlaib has advocated for a “one-state solution” – which essentially results in the destruction of the Jewish state. She supports the antisemitic Boycott, Divestment and Sanction (BDS) movement, whose leaders admit they would never accept Israel, and is close to the group American Muslims for Palestine (AMP), an anti-Israel group whose leaders were part of the old Hamas support network Marzook led.

Last spring, a federal judge allowed a lawsuit to proceed against AMP after finding there was sufficient evidence showing it is “a disguised continuance” of that network, which included the Holy Land Foundation.

Maybe her support for “the six” proscribed charities is rooted in progressive ideals about humanitarian work. Probably not.

Re: Posted with permission.