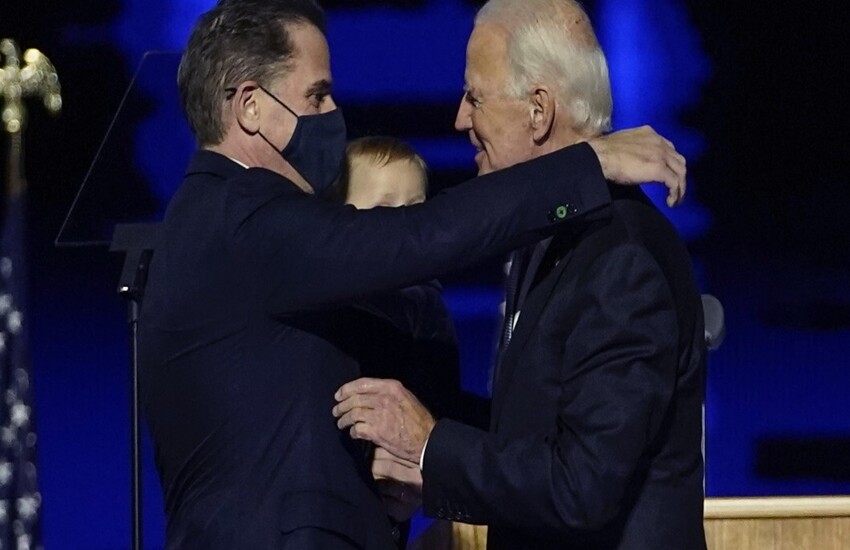 The big but wrong lesson establishment newsrooms thought they learned following the 2016 presidential election was not that they’re trapped in an ideological echo chamber, but that they did not “resist” Donald Trump hard enough.

They have spent the past four years applying that lesson — and resist they have, going so far as to bury potentially explosive and legitimately newsworthy reports suggesting President-elect Joe Biden’s son, Hunter, may have leveraged his father’s political clout to line the family’s pockets.

The Justice Department revealed this week that it is investigating Hunter’s business activities, particularly his dealings in China. A joint force made up of federal prosecutors in Delaware, the IRS Criminal Investigation agency, and the FBI has already begun issuing subpoenas and interview requests.

“I learned yesterday for the first time that the U.S. Attorney’s Office in Delaware advised my legal counsel, also yesterday, that they are investigating my tax affairs,” Biden the lesser said this week in a statement. “I take this matter very seriously but I am confident that a professional and objective review of these matters will demonstrate that I handled my affairs legally and appropriately, including with the benefit of professional tax advisors.”

The federal investigation, which began in 2018, is focused specifically on possible counterintelligence concerns, including that Hunter’s business dealings with Chinese executives may have included tax and money laundering violations.

What is especially notable about the Justice Department’s announcement this week is that details of its investigation first came to light this fall, back when the New York Post scooped the entire news industry with a report detailing the existence of a laptop, which reportedly belonged to Hunter, and possibly incriminating emails pertaining to his business activities.

Neither Joe Biden nor his presidential campaign disputed the authenticity of the emails, which came into the New York Post’s possession via President Trump’s personal attorney Rudy Giuliani.

Included among the laptop materials published by the New York Post is an official FBI document that includes a case number with “the code associated with an ongoing federal money-laundering investigation in Delaware,” according to the Daily Beast.

“Another document—one with a grand jury subpoena number—appeared to show the initials of two assistant U.S. attorneys linked to the Wilmington, Delaware, office,” the report adds.

At the same time that the New York Post was reporting about the emails, focusing mostly on Hunter’s business activities in Ukraine, the computer repairman who turned the laptop over to the FBI in 2019 showed reporters a copy of a subpoena. It was a subpoena which, as it turns out, is very much real.

And you know what happened after the New York Post reported on the existence of the laptop and the emails and published the corresponding documents? Twitter locked the New York Post out of its account for allegedly spreading disinformation while establishment media assured everyone that the story was flimsy, that it was false, and that it was most likely the work of Kremlin operatives.

National Public Radio managing editor for news Terence Samuel, for instance, stated publicly in October that his newsroom would not “waste our time on stories that are not really stories.

“We don’t want to waste the listeners’ and readers’ time on stories that are just pure distractions,” he said.

“There are many, many red flags in that New York Post investigation,” NPR Public Editor Kelly McBride said elsewhere in her daily newsletter. “Intelligence officials warn that Russia has been working overtime to keep the story of Hunter Biden in the spotlight.”

Infuriatingly enough, after doing its part to dismiss the story as a Kremlin operation, Politico published a follow-up report after Election Day titled, “How ‘Obamagate’ and Hunter’s ‘laptop from hell’ fizzled.”

Yeah, funny how that works.

The New York Times reported, “Trump said to be warned that Giuliani was conveying Russian disinformation.”

The Washington Post, which tells us that “democracy dies in darkness,” even published a report with the totally unintelligible headline, “Biden relies on pattern of activity to blame Russia for release of data from what is said to be his son’s laptop.”

Reminder: Evidence of the Justice Department’s investigation of Hunter was out in the open following the New York Post’s publication of the laptop’s reported contents. It was right there for establishment journalists with the full backing of their newsrooms to authenticate and investigate. But they didn’t. Instead, they alleged a Kremlin conspiracy. They alleged it without a single shred of actual evidence to that effect. Not one.

“U.S. intelligence agencies believed that Rudy Giuliani was being worked over by Russian intelligence assets as a conduit to feed misinformation to the president of the United States,” said the Washington Post’s Philip Rucker.

NBC News’s Ken Dilanian claimed elsewhere, “The picture here is that Rudy Giuliani, the president’s lawyer, seems to have been in the crosshairs of Russian intelligence who were trying to peddle disinformation and discredit Joe Biden.”

NBC’s crackerjack “disinformation” expert Ben Collins claimed elsewhere that reporters simply could not cover the Biden allegations because the press is not in physical possession of said laptop.

“Reminder for your uncle,” he explained, “the press can’t cover ‘Hunter’s hard drive’ because … we don’t have access to it.”

For the record, this is a completely made up editorial standard.

“Trump is reading from the teleprompter about the NY Post story,” said HuffPost White House correspondent S.V. Date. “So he is now actively pushing Russian disinformation as part of his scripted campaign message. Just like 2016.”

So, congratulations to the Justice Department for plugging all those Trump-era leaks. Not a single whisper in the press about this two-year-old investigation. Excellent work, everyone.

Better luck next time, establishment journalists. After four years of Russian collusion duds and dead-end impeachment stories, you all not only took a pass on reporting on a genuine federal investigation that first came to light with the New York Post’s reporting, but you actively worked to bury the story, mendaciously dismissing it all as Kremlin disinformation.

So much for what Vanity Fair called the “golden age for journalism.”