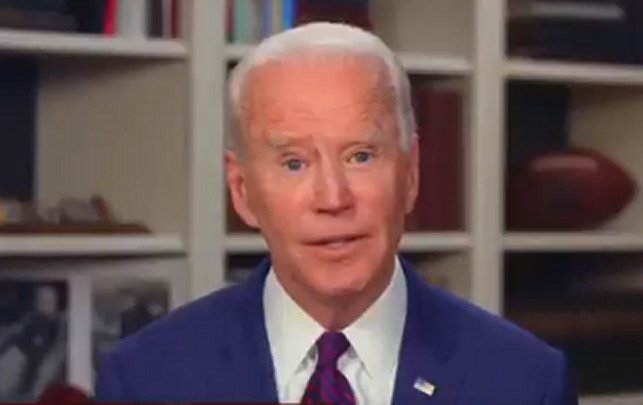 Donald Trump shocked the political world in 2016 by winning the state of Michigan.

It had long been considered a Democrat stronghold, especially considering all the union workers in the auto industry. But many of those folks felt betrayed by the Democratic party and decided to go with Trump instead.

Now Democrats are desperate to win the state back in 2020, and they’re getting anxious because Joe Biden does not have a strong ground game in there.

our years ago, Don Sabbe made what he calls a “devastating” mistake. Determined only to cast a vote for a candidate he believed in, he left the top of his ballot blank in the 2016 presidential election. This year, the 83-year old former Chrysler employee says he’ll definitely vote for Joe Biden, but he’s getting concerned about Biden’s campaign here in Michigan.

“I can’t even find a sign,” Sabbe says outside a Kroger’s in Sterling Heights, where surrounding cars fly massive Donald Trump flags that say “No More Bullsh-t” and fellow shoppers wear Trump T-shirts for their weekend grocery runs. “I’m looking for one of those storefronts. I’m looking for a campaign office for Biden. And I’m not finding one.”

The reason Sabbe can’t find a dedicated Biden campaign field office is because there aren’t any around here. Not in Macomb County, the swing region where Sabbe lives. It’s not even clear Biden has opened any new dedicated field offices in the state; because of the pandemic, they’ve moved their field organizing effort online.

The Biden campaign in Michigan refused to confirm the location of any physical field offices despite repeated requests; they say they have “supply centers” for handing out signs, but would not confirm those locations.

Democrats should be worried about this.

Joe Biden’s ground game in Michigan is so atrocious that his staffers don’t even know what “on the ground” means. https://t.co/zv6l469gZApic.twitter.com/608jMEgps1

The Biden campaign raised $300 million just in August and doesn’t have an office in Michigan. Incredible. https://t.co/munyUtPclm

Trump has an extremely good