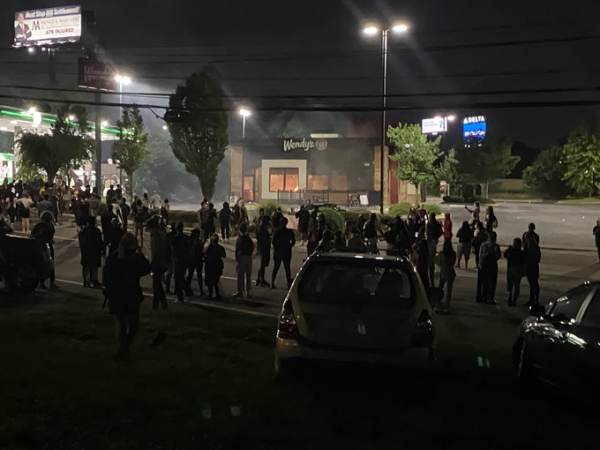 Rioting protesters set fire to an Atlanta Wendy’s Saturday night. The fast food restaurant was the scene of the deadly police shooting Friday night of a black man, 27-years-old Rayshard Brooks, as he resisted and fled from arrest with a Taser he stole from an officer. Brooks, who was being arrested after being found passed out at the wheel of a car in line at the Wendy’s drive-thru and allegedly failed a field sobriety test, was shot by police when he turned and aimed the stolen Taser at an officer as he fled.

Protesters have lit a fire inside Wendy’s. @ajcpic.twitter.com/7E6S0vJbkx

The Wendy’s in #Atlanta where #RayshardBrooks was executed by race soldiers last night, is currently on fire pic.twitter.com/o89yc6A88P

Wendy’s is on fire. pic.twitter.com/YloSVV2AKQ

Protesters had earlier smashed window at the Wendy’s and tossed “fireworsk” inside.

Protesters are breaking the windows of the Wendy’s that Rayshard Brooks was shot at. @ajcpic.twitter.com/CNJS5TE9Pa

Protesters have thrown a firework inside Wendy’s @ajcpic.twitter.com/XVIY3xn2dN

There goes @Wendys on University Ave.

Protesters are burning a bush outside of Wendy’s. @ajcpic.twitter.com/b9TqBHwcF7

GBI released video that shows the moment Rayshard Brooks was shot and killed by an Atlanta Police officer at a Wendys on University Ave last night. Police say Brooks had taken an officer’s taser and pointed it at the officer as he ran. pic.twitter