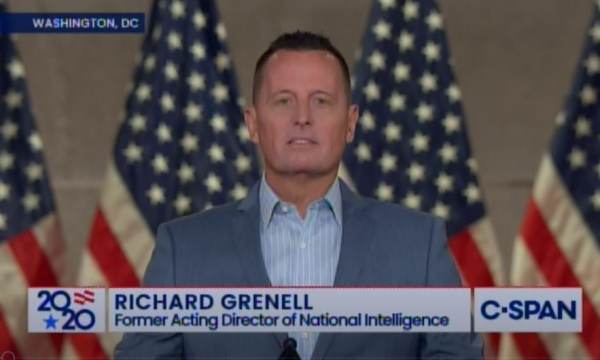 Former US Ambassador to Germany and former DNI Ric Grenell spoke on Wednesday night at the RNC 2020.

Ric focused on the historic foreign policy accomplishments of the Trump administration including the defeat of ISIS, the blows to the Iranian regime and the successes with NATO and our foreign trade partners.

Then at one point in his talk Ric confronted the Obama-Biden regime and their spying on the Trump campaign, the Trump Transition team and the administration.

Ric was the first speaker this week to blast the former president for his criminal acts and unprecedented behavior.

Ric Grenell: Today the Democrats blame a global pandemic that started in China on President Trump. And they still blame Russia on Hillary Clinton’s loss in 2016. As acting Director of National Intelligence I saw the Democrats’ entire case for Russian collusion. And what I saw made me sick to my stomach. The Obama Biden Administration secretly launched a surveillance operation on the Trump campaign. And silenced the many brave intelligence officials who spoke up against it. They presented bogus information as facts. They lied to judges. Then they classified anything that undermined their case. And after Donald Trump won the election, when they should have continued the American tradition of helping the president-elect transition into the White House, they tried instead to undercut him even more.