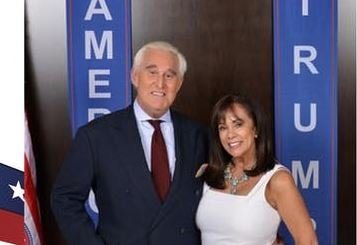 This is the same prison that has a coronavirus outbreak so bad the government just released a convicted pedophile and a convict who committed bank and wire fraud due to the danger.

As we reported on Saturday, on June 26th Judge Amy Berman Jackson ignored the substance of Stone’s motion to either delay his surrender date or mandate home confinement due to the dangers of Coronavirus and ordered him to report to prison on July 14. In essence, Judge Jackson gave Roger Stone two more weeks to sit at home and wait for his death sentence. He received the following order: 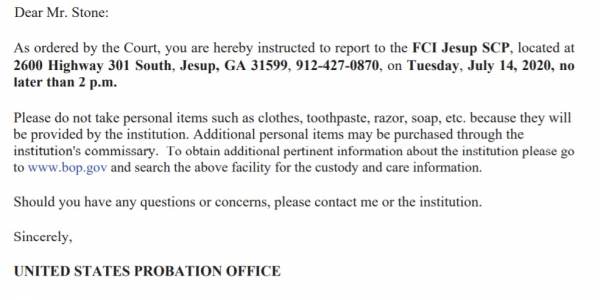 A report at a local television station in April warned about the prison Roger Stone is assigned to report to on July 14th [emphasis ours]:

JESUP, Ga. (WTOC) – WTOC heard from an employee at the Federal Correctional Institution in Jesup who’s worried about how the federal prison is handling the pandemic.

She believes staff and inmates are at risk.

There are no confirmed cases of COVID-19 at FCI Jesup. However, WTOC’s Amanda Aguilar spoke to the Union President of the Bureau of Prisons’ local chapter, who said it’s only a matter of time unless the prison’s administration takes better precautions.

There are around 2,000 inmates and almost 500 staff at the federal prison.

“If it comes to Jesup, it will be through the staff, and it will be because they did not provide us the equipment to prevent it,” she said.

According to Milwood, staff members have been given three cotton masks that are thin and not protective.

“You can see down there, there’s no protection whatsoever,” Milwood said, showing how the mask doesn’t fully cover nose or mouth.

Given the lack of transparency and the uncertain situation regarding the dangers of Coronavirus at the corrections facility at Jesup, Georgia, where prison guards and employees and their union have complained about the lack of masks, lack of gloves, no hand-washing regimens and no efforts at internal social distancing, Roger Stone is at risk.  Stone is 67 years old and has a history of asthma, because of this Judge Jackson’s ruling is the same as giving Stone the death