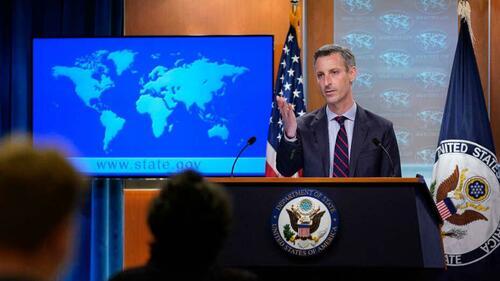 Russia has responded to the United States’ elaborate and bizarre accusations that it will produce a propaganda false flag video to use a pretext to invade Ukraine, calling the US narrative “delusional” and “nonsense”. “The delusional nature of such fabrications — and there are more and more of them every day — is obvious to any more or less experienced political scientist,” Foreign Minister Sergey Lavrov said in televised remarks Friday.

“It’s not my call to guess why our Western colleagues can be surprised now,” Lavrov added. “They are surprised with or without reason, mostly for no reason, or at some reasons that they make up themselves.”

Referring to a US State Department explanation on Thursday, which was met with considerable pushback even from US mainstream reporters, Lavrov described, “I saw on the Internet some statements by the Department of State that Russia was plotting to film some fake videos of an alleged Ukrainian attack on the Donbass. The craziness of such ideas…  is obvious to any more or less experienced political scientist,” the Russian top diplomat said.

When pressed for evidence by AP journalist Matt Lee, the State Department’s Ned Price tried to shut down the line of inquiry by suggesting Lee and other skeptics “find solace in information that the Russians are putting out” – to which Lee audibly laughed, given he was the most veteran American journalist in the room.

Earlier on Thursday the Biden administration and US intelligence came out with some explosive and outlandish claims, saying Russia is planning to release a video depicting graphic scenes of a “staged false explosion with corpses, actors depicting mourners, and images of destroyed locations and military equipment,” as CNN described it. The story was featured initially in The Washington Post and New York Times – and as usual was anonymously sourced to “officials say…”.

Separately on Friday, Putin spokesman Dmitry Peskov told reporters, “I’d recommend not to take anyone’s word for it, especially the State Department, when it comes to these issues.”

Matt Lee himself during Thursday’s testy exchange during the US briefing pointed out when Price refused to cite any level of sourcing or evidence, “That’s not evidence, Ned, that’s you saying it.” Lee pointed out the recent history of lies and half-truths coming from US officials…

“I would like to see some proof that you can show that shows what the Russians are doing. I’ve been doing this a long time…I remember Iraq and that Kabul’s not going to fall.”

Meanwhile, Rabobank has some as usual insightful and amusing commentary on the sad state of affairs as follows below…

Oil prices jumped – and so they should. Either the US allegation is true, and Russia wants a war via fake news; or it isn’t, and the US wants a war (**cough** Gulf of Tonkin** cough **Iraqi WMD** cough) via fake news about fake news; or, the US is so incompetent it is likely to get a war anyway. As another 1,700 US paratroopers fly from Fort Bragg to Europe, Russia says it is justified in responding in kind. (Which it has been doing on massive scale well in advance.)