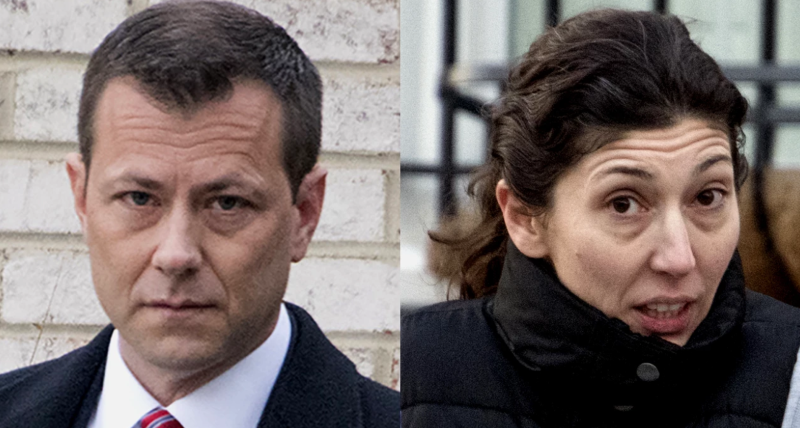 A cache of Russiagate documents President Donald Trump wanted released during his final days in office contained information about a pair of former leading FBI officials infamous for their private exchanges disparaging Trump, according to a new report.

White House chief of staff Mark Meadows had a plan to give the binder to at least one conservative journalist, but he backed off when Justice Department officials warned that circulating these messages from Strzok and Page could put officials in jeopardy of being sued over privacy law violations, sources told the news outlet.

There remains an air of mystery about the documents covered by Trump’s 11th-hour declassification memo issued on Jan. 9, 2021, at the end of his administration. In it, Trump declared he declassified materials in the binder and ordered the attorney general to implement the redactions proposed in the FBI’s Jan. 17 submission and “return to the White House an appropriately redacted copy.”

This order, Meadows wrote in his 2021 book The Chief’s Chief, would help ensure transparency in special counsel John Durham’s criminal inquiry into the Trump-Russia investigation that began with Crossfire Hurricane. “I am confident that President Trump’s order will provide much needed clarity and remove any excuse for the final Durham report to remain in a classified vault,” he wrote.

However, there has yet to be a full disclosure in the 19 months since Trump left office, leaving the fate of Trump’s declassification order in the hands of President Joe Biden’s administration. “That order, if it exists, can be overruled now by Biden,” noted national security lawyer Bradley Moss.

Details about the binder were nestled in the lengthy New York Times report, which generally covered the chaotic final days of the Trump White House and was published in the aftermath of an FBI raid of Trump’s Mar-a-Lago resort, in which agents seized documents, including “highly classified” ones, that were not sent to the National Archives and led to a Justice Department review.

A source is cited saying Russia investigation documents were not among the materials taken during the FBI’s search of Trump’s Florida residence.

Kash Patel, who held high-ranking positions in the Trump administration and has since become one of Trump’s representatives to the National Archives in this document dispute, said last weekend that Justice Department officials appeared to be maneuvering to block the disclosure of documents from the Russiagate controversy.

Because there appears to be an “ongoing” counterintelligence investigation, he argued, “you will never be allowed to see the Russiagate docs or any other docs that President Trump lawfully declassified, and they will hide it from the public,” Patel told Sunday Morning Futures host Maria Bartiromo. Patel previously claimed on Jan. 20, 2021, Trump’s final day in office, that “99%” transparency had been achieved, but last Sunday, he pared back that estimate to 60%.

Text messages between Strzok and Page, in which they displayed a negative opinion of Trump, were uncovered over the course of the Justice Department inspector general’s investigation into the DOJ and FBI’s conduct during the investigation into Hillary Clinton’s unauthorized private email server, which she used while secretary of state.

The messages between Strzok, who played a key role in opening the Crossfire Hurricane investigation in 2016 and interviewed retired Lt. Gen. Michael Flynn in January 2017, and Page, have fueled claims by Trump and his allies accusing the Justice Department and FBI of political bias — claims that continue to this day with the Mar-a-Lago raid.

A text message sent by Strzok to Page in August 2016 mentioning an “insurance policy” is integral to what Republican investigators have long suspected to be part of a so-called plot to undermine then-candidate Trump — a view rejected by ex-top FBI brass involved in the matter. Strzok and Page, who were romantically linked, have filed separate lawsuits against the Justice Department and the FBI for alleged wrongful firing under political pressure and violating the Privacy Act with the release of nearly 400 of their text messages, respectively.

A Justice Department inspector general report said thousands of text messages were recovered from their work phones as part of a review of a gap in messages sent between December 2016 and May 2017. The watchdog found technical problems were at fault for the missing messages, not any intentional erasures. Both Strzok and Page were members of special counsel Robert Mueller’s team for a time. Strzok was removed from the team upon the discovery of their anti-Trump texts and fired from the FBI in 2018; Page resigned from the bureau also in 2018.