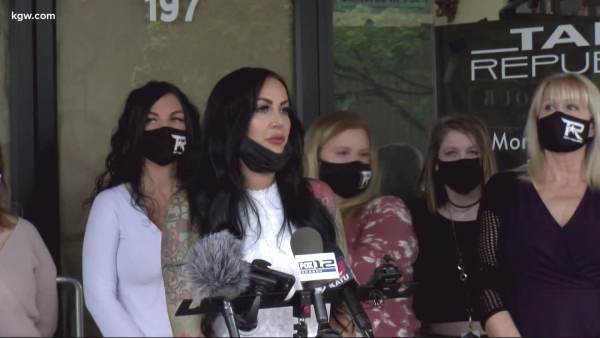 Gateway Pundit readers may recall the story of Lindsey Graham (no, not that one), the salon owner in Salem, Oregon, who opened her shop in defiance of Governor Kate Brown’s shut down orders. She was threatened with $70,000 in fines, targeted by the rioters, her building lease was jeopardized, and the state threatened to take her children away. She was eventually hit with $14,000 in fines from OSHA.

She’s now firing back, and has filed a lawsuit against the state.

The embattled owner of Glamour Salon, who reopened her downtown Salem salon on May 5 in violation of the state’s “Stay Home, Save Lives” shutdown order, filed a $100,000 civil rights lawsuit against Gov. Kate Brown, the State of Oregon and several state agencies on Wednesday.

In the lawsuit, attorneys for Lindsey Graham accuse the governor and state of violating her civil rights and violating the Constitution by ordering a shutdown of her salon and other businesses in the early days of the COVID-19 pandemic.

The actions by state agencies made it “very clear that the government was targeting” her, Graham told the Statesman Journal in an interview Thursday.

She accuses the defendants, which includes the Oregon Department of Human Services and the Public Health Division, of retaliating against her and abusing the civil process after she refused to comply with the governor’s order.

She said she hopes the lawsuit will hold government officials accountable so they don’t have the authority again to shut and lockdown businesses without due process.

“It’s to prevent Americans from losing their livelihoods,” Graham said.

Here is a long-form interview with Graham from June 1st, before the lawsuit was filed, by Salem News Journal: