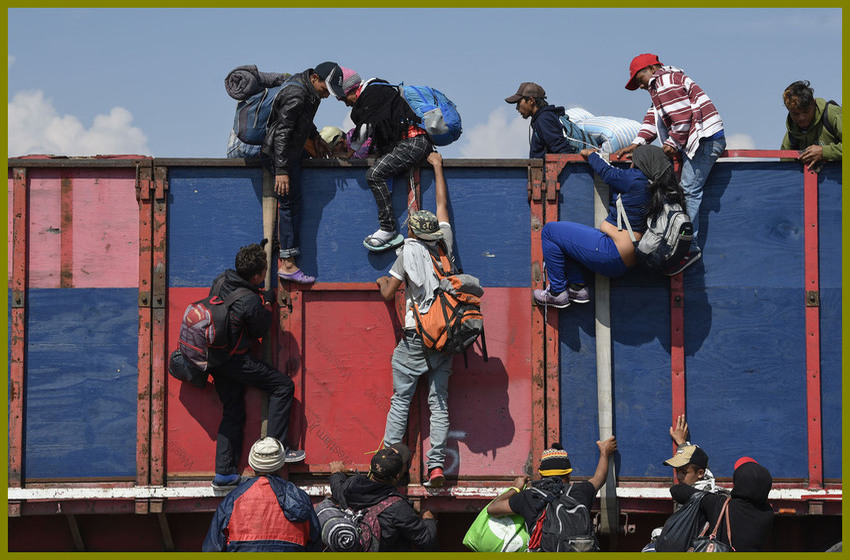 Central American migrants -mostly Honduran- taking part in a caravan to the U.S., get on board a truck heading to Irapuato in the state of Guanajuato on November 11, 2018. (Photo credit: ALFREDO ESTRELLA/AFP via Getty Images)

When news recently broke that the Montgomery County, Md. police department was selecting an illegal alien to accompany them in “ride alongs,” it set off quite a kerfuffle among local police. But it’s not until you dig a little further into the article that you learn that in addition to being in the country illegally, this unidentified Clarksburg, Md. resident also has an active federal arrest warrant against him – for failing to show up in immigration court.

How ironic is it that we have someone in the country illegally, who has never had a thorough criminal background check, has shown outright contempt for the U.S. justice system by skipping a court date, and has now become a civilian liaison with the local police department? And now he’ll be riding around in a squad car as if he’s a Boy Scout seeking to witness American law enforcement in action.

The saddest realization about this whole situation is that it clearly demonstrates that despite the death of some 3,000 innocent people on 9/11, America never truly learned the lesson about just how important it is to know who is in our country and why they are here. In fact, it’s such a non-issue in some jurisdictions that they embrace sanctuary policies and knowingly defy any kind of assistance or sharing of communications with federal immigration authorities.

Sept. 11 didn’t just happen because we were caught unaware. Our nation had actually played a role of the unknowing enabler. We allowed people to enter the U.S. on a host of different visas and never knew if they left. While they remained here, some in illegal status, the 19 hijackers obtained 30 state-issued IDs so they could easily travel around the U.S. (and board airplanes), establish bank accounts, and blend into our diverse population.

The only problem is that they weren’t here to chase the American dream…they were here to blow it up.

Sanctuary policies create an artificial barrier between the right hand, federal law enforcement officials, and the left hand of the law, their local counterparts.  State and local law enforcement officers, some 900,000 strong across the nation, are the eyes and ears of the communities where they live. They are usually the first line of defense in finding and removing those who are in the country illegally. Many people forget that just days prior to 9/11, local police encountered two of the perpetrators on random traffic stops, including one of the deadly pilots. But because there was no cooperation between state and local law enforcement and federal immigration officials, they were released.

What a dangerous mistake that turned out to be. And yet we’re walking into it again.

There are now more than 560 sanctuary jurisdictions across the country, and entire sanctuary states. Fifteen states and the District of Columbia currently issue driver’s licenses to illegal aliens, and another half-dozen are considering doing so. In these states, leaders appear to value the political statement of thumbing their nose at the Trump administration more than they value protecting the lives of the very citizens they are sworn to keep safe. Somehow, the tears and anguish faced by the Angel families – those who have lost loved ones to illegal aliens – seem to pale in comparison to the value of blurring the line between legal and illegal immigrants.

When the right hand and left hand work together, they can form a web of protection for the American public, protecting all of us. Sanctuary policies fly in the face of national security, turn logic on its head, and yes, endanger the homeland. The administration has taken steps to push back against these policies by attempting to claw back federal law enforcement funds given to sanctuary jurisdictions, but it’s currently caught up in the courts. The administration must take all steps necessary to end this madness soon.

Dave Ray is director of communications at Federation for American Immigration Reform (FAIR).