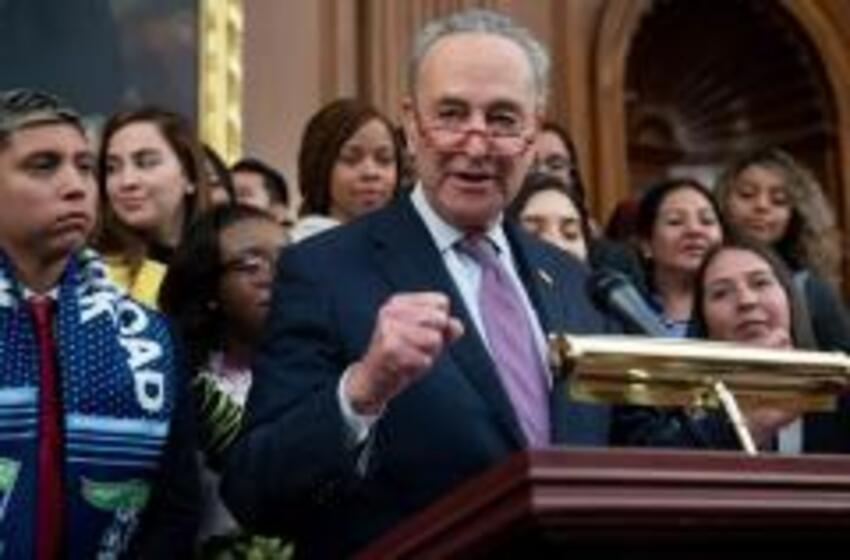 (CNSNews.com)- Speaking on ABC’s “This Week with George Stephanopoulos,” Senate Minority Leader Chuck Schumer (D-N.Y.) said “I hope, pray, and believe there’s a decent chance that four Republicans will join us” in asking for witnesses and documents in a Senate impeachment trial and “if they do we’ll have a fair trial.”

Host George Stephanopoulos asked, “Where do things stand on Speaker Pelosi sending over the articles of impeachment to the Senate?” Schumer replied by saying Democrats need access to more witnesses and documents:

“Let me just take one step, as how where we’re at. When these articles come over, the focus will be on four Republican senators.

“First, the charges, as you know, are grave. For the president to withhold aid so that a foreign power can interfere in our elections and benefit him is one of things the Founding Fathers were most worried about when they wrote the Constitution. They gave Congress the ultimate power – the Senate and the House – of impeachment. If we’re not going to have a fair trial, if all the facts are not going to come out, if we’re not going to hear the truth, and there’s going to be just one giant cover-up, America has changed and the power of an overweening executive is far too great.

“Let me just finish. McConnell will not go for a fair trial. You can’t have a fair trial without witnesses and documents, particularly those who were right at the scene of the charges. But, four Republican senators can join us. We have the ability to require votes on the four witnesses we’ve asked for, whether there’s agreement or not.”

“We have the ability to ask for the documents and I hope, pray, and believe there’s a decent chance that four Republicans will join us. If they do, we’ll have a fair trial. We don’t know what these witnesses will say. It may be exculpatory, it may be further condemning the president. But, then, we will let the chips fall where they may.”

“But, you heard Senator McConnell say that, let’s follow the Clinton example,” Stephanopoulos followed up: “You go for the first two weeks, have the arguments from the lawyers on both sides, and then have a vote, then, consider whether to have witnesses to come forward. What is wrong with that?”

Schemer responded: “Where, but in ‘Alice in Wonderland,’ do we hear all the arguments, and then maybe have the evidence, the witnesses, and the trial?”

“Well, that was the Clinton model, though,” Stephanopoulos interjected.

“Well, the Clinton model is totally different,” Schumer argued. “Two reasons. One, they had all been heard from already. Every one of those witnesses had been heard from before. These are four witnesses who are eyewitness to the main charge against the president: that he withheld the aid for political benefit to himself.”

“It’s not Secretary Pompeo. It’s [Robert] Blair, and it’s [Michael] Duffey. Look what — and in the last two weeks, look what’s come out. Duffey has said, we got to hush up why he — this is in an email,” Schumer said, adding that it won’t stand well with Americans if he doesn’t get his way:

“We got a hush up why the president came out. And then he said, this directly came from the president. Shouldn’t that man testify? Sixty-four percent of Republicans agree. So, I am hopeful that our Republican colleagues will come forward. And I will add one thing. If they vote for witnesses, if four of them join us to get witnesses and documents, it doesn’t mean they’re going to vote to convict the president. It means we will hear all the evidence. It may, as I said, be exculpatory. It may be further condemning the president.”