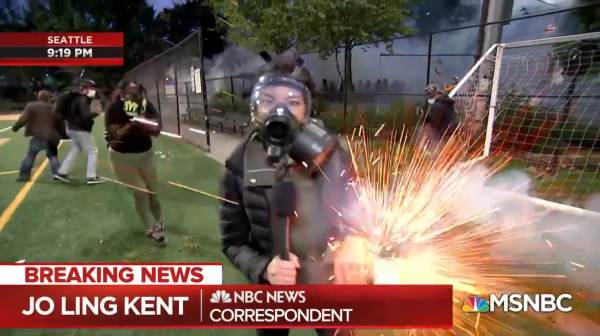 On the fourth night of protests-turned-riots, the same verse was repeating in Seattle, where things got out of hand, police declared a riot, and used explosives and tear gas to break up the crowds.

In the middle of it was NBC reporter Jo Ling Kent, complete with gas mask. As one skirmish was unfolding, and people were darting in various directions, she was hit with what looks to be firework, likely launched from one of the antifa terrorists. And right before she went live it appeared as though rioters were trying to disable her equipment. You can one woman (?) shrieking “YOU SORRY BITCH!” And it was all caught on video as she was reporting live!

Reminiscent of last weeks quip about the protests in Minneapolis being “mostly peaceful” as buildings burned in the backround,  literally at the same time the MSNBC YouTube Channel posted that video, they also posted a video about how “peaceful” the protest was:

Kent later reported that she was alright:

Hey everyone. Thankfully, our whole team is ok and safe. I’m totally fine – my jacket sleeve got singed and that’s it.

So sorry for the curse words.. and thank you for the sweet texts, calls and tweets

Of course crazed leftists were quick to blame police and say it was one of the blast balls or some other device launched an officer:

Police have turned it into a war zone. https://t.co/jScbkC7hyU