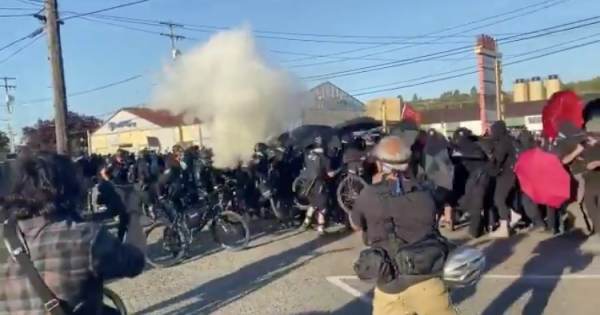 Seattle police on Monday charged through a barricade of Antifa militants who were throwing rocks, bottles and projectiles at officers.

Antifa terrorists gathered outside of the Seattle Police Officers Guild and threw projectiles at officers.

The officers charged through the barricade of terrorists.

The aftermath after @SeattlePD rushed through the Antifa barricade made of umbrellas. #seattleriots#seattleprotestspic.twitter.com/IvlaLIU31a

Officers have made several arrests, and have issued several dispersal orders to crowd.

Antifa continued to throw rocks and bottles at officers near 6th and Royal Brougham.

Crowd continuing to throw rocks, bottles, and at officers near 6th and Royal Brougham.

Seattle police recovered Molotov cocktails outside of the SPOG office.