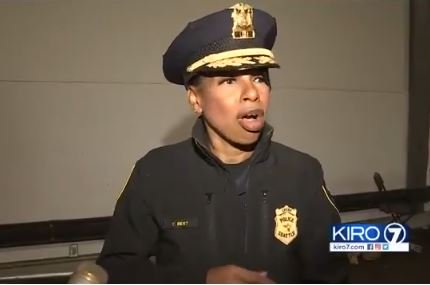 Businesses and police precincts in Seattle boarded and barricaded their properties in preparation for expected violent Antifa and Black Lives Matters protests this weekend. The protective measures were taken as Seattle Police Chief Carmen Best sent a letter to Seattle businesses and residents that police, having been stripped by the City Council of standard non-lethal riot control tools, will not be able to defend property from rioters.

A bill unanimously passed last month by the City Council that goes into effect this weekend (after Mayor Durkan declined to veto it and a federal judge declined to stop it) bans police from the “ownership, purchase, rent, storage, or use of crowd control weapons” including “kinetic impact projectiles, chemical irritants, acoustic weapons, directed energy weapons, water cannons, disorientation devices, ultrasonic cannons, or any other device that is designed to be used on multiple individuals for crowd control and has the potential to cause pain or discomfort.”

Downtown Seattle Businesses are boarding up in anticipation for tomorrow’s “peaceful” protests.#seattleprotests#seattleriotspic.twitter.com/OYANNFEyzT

@SeattlePD West Precinct, also SPD HQ, has boarded up their windows and brought in cement barriers to keep “peaceful” protesters from vandalizing and breaking-in. pic.twitter.com/WhMgKhYcpz

@SeattlePD East Precinct, the Precinct that Antifa and BLM protesters previously overtook to create CHAZ/CHOP, is boarded up and fenced off.

The Chief of Seattle police basically concedes if you or your property is attacked by the mob, you won’t get much assistance. It’s not her fault. pic.twitter.com/GspibGqfYD