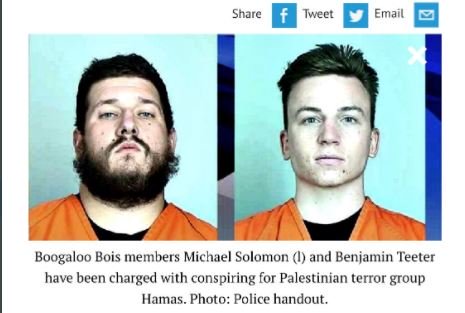 Last week the FBI arrested two Minnesota men after a set-up operation where they pretended to be Hamas operatives.

The men were arrested for attempting to conspire with the Hamas terror group.

CBS News was quick to describe the two men as “far-right” Boogaloo Bois.

CBS News goes on to describe the “far-right” operatives.

The two men said they wanted to destroy US monuments, they wanted to raid and attack white supremacists and they said their views lined up with Hamas.

But the media claims this is “far right.”

Two self-described members of the far-right group Boogaloo Bois have been charged with attempting to conspire and become “assets” for Hamas, the Justice Department said on Friday. Hamas is designated by the U.S. as a terrorist organization, and the Boogaloo Bois is a loosely-connected group of far-right individuals who espouse a violent, anti-government ideology…

…Authorities said a witness said Solomon was openly carrying a firearm in a residential area of Minneapolis, and that witness interacted with Solomon and Teeter over the next few days.

The witness told the FBI agents that Solomon and Teeter possessed firearms and substantial quantities of ammunition and that Solomon, Teeter, and other members of the Boogaloo Bois discussed committing acts of violence against police officers and other targets, the Justice Department said.

The FBI received information in early June about Solomon, Teeter and other members of the Boogaloo Bois and Boojahideen through a confidential source who the defendants believed was a member of Hamas, the complaint said. Solomon and Teeter allegedly said their views lined up with Hamas, and offered themselves as “mercenaries” to generate cash and other funding for Hamas.

According to the complaint, Solomon and Teeter told the source and another individual they believed to be a member of Hamas, but who was really an FBI agent, about their alleged idea of destroying government monuments, raiding the headquarters of a White supremacist organization in North Carolina and targeting politicians and the media.

One of the “far right” operatives Benjamin Teeter still has a Twitter page.

On his page he describes himself as a “left Anarchist.”