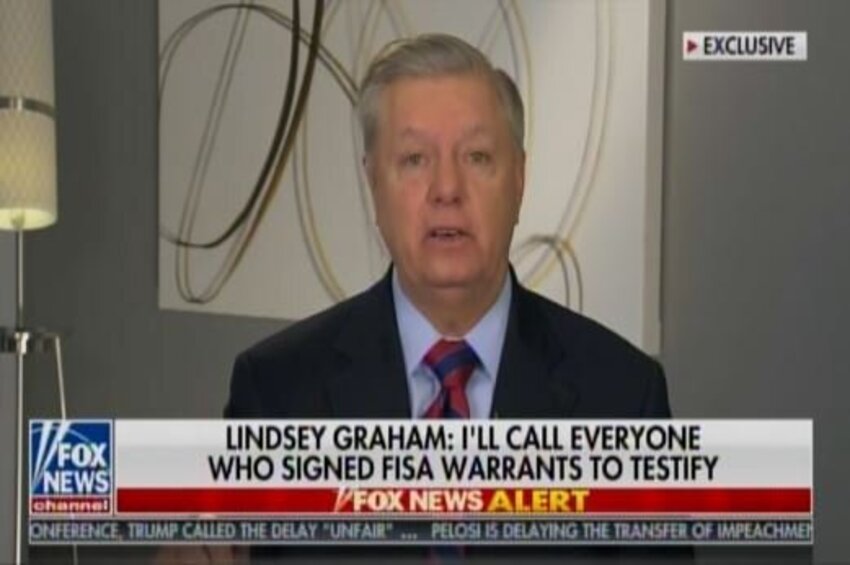 (CNSNews.com) – “The Horowitz report is the first step in a long journey regarding FISA abuse,” Sen. Lindsey Graham (R-S.C.), the chairman of the Senate Judiciary Committee, told “Sunday Morning Futures.”

He called it a “great start” that the FISA Court rebuked the FBI for its misleading warrant application:

They came down hard on the FBI. If they had failed to do that, I would have lost all confidence in the court.

Comey said last week he was sorry, it was sloppy. No, Comey, it wasn’t sloppy. It was criminal.

I’m going to call every person who signed the warrant application. I’m going to find out why (former CIA Director John) Brennan went to Harry Reid in September of 2016 to talk about the investigation.

I’m going to find out why it took two years for Mueller to realize there was no ‘there’ there. We’re going to look long and hard at FISA abuse. We’re going to pass laws to make sure this never happens again.

“And you’re saying each of these people, you’re going to call down to testify?”

Yes, there’s two questions I want to ask these people. When you signed the warrant application, how much time did you spend trying to figure out if it was actually true? And how far up the chain did this go?

Did President Obama know about the counterintelligence surveillance of the Trump campaign? Did Vice President Biden know? How much information was provided to Susan Rice? I want to know how far up the chain the investigation went. I want to know why so many people could sign a warrant application so flawed.

So there’s a lot of questions. I want to make sure this never happens again. To the American people, you deserve better than this. Every American should be worried about FISA.

“And to this impeachment debacle, to my Democratic colleagues, impeachment is a dead cat. Stop playing with it,” Graham said.

(They laughed; Bartiromo asked Graham to repeat what he just said.)

“Impeachment is a dead cat. Stop playing with it. Bury it. It’s going nowhere. Quit violating the Constitution. Give the president his day in court. And let’s get this behind us, so we can talk about things that people really care about in this country,” Graham said.