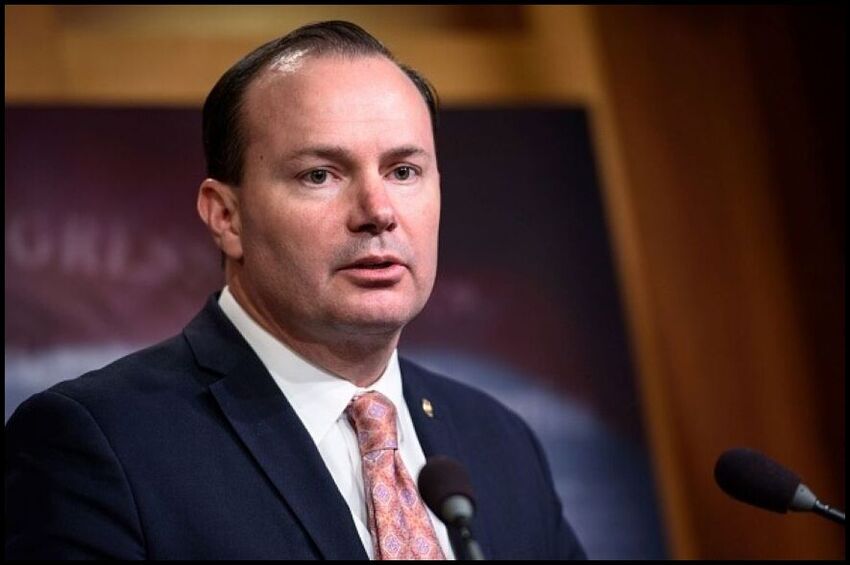 Sen. Mike Lee (R-Utah) (Photo by Mandel Ngan/AFP via Getty Images)
“I was taking notes,” Lee said. “I mean, look, I was taking count, number one, of the number of times they mispronounced Pat Cipollone’s name. It’s not that hard, people. I don’t think I heard a member of the House management prosecution team pronounce his name once correctly the entire day.”I took notes of the number of times they were personally insulting. At one point the chief justice had to step in and remind them not to do that. This is the Senate,” Lee said.Lee said although Chief Justice John Roberts admonished both sides, he shouldn’t have: “I’m grateful to the chief justice, he did a good job, his demeanor was great, he maintained his patience. I thought it was unfair of him to direct that to both sets of counsels. Because it felt like collective punishment for isolated guilt.

“This was the fault of the House management prosecution team. They were rude, they were insulting, they were demeaning. Not just of the president but their opposing counsel and indeed, to the Senate itself.”

Lee indicated that the House impeachment managers didn’t do themselves any favors with senators, who are acting as the jury:

“There’s an old adage, it’s an adage that doesn’t really even need to be repeated most of the time, which is, you don’t go in and insult your jury or your judge. Here they did both.”

Rep. Jerrold Nadler (D-N.Y.), for one, suggested that Republicans would be “complicit in the president’s cover-up” if they vote against calling witnesses.

“A real trial, as we know has witnesses,” Nadler lectured. “You are here to do your duty, conduct a fair trial. All the witnesses must be permitted. That’s elementary in American justice. Either you want the truth and you must permit the witnesses, or you want a shameful cover-up. History will judge. So will the electorate.”

Sen. Lee said he sees no need to call witnesses:

“I still think that the impeachment charges themselves are sufficiently flawed and sufficiently baseless. There’s not a genuine issue of material fact here. Meaning, we don’t have any facts that are in dispute that are sufficiently critical to the charges and to their success.

“I’m not seeing any need for witnesses at all.”

Lee added that calling John Bolton would present “a privilege issue” that would “make things a lot more complicated.”

“And I don’t think we need to mire this Senate impeachment trial in months of litigation that would inevitably ensue from that.”