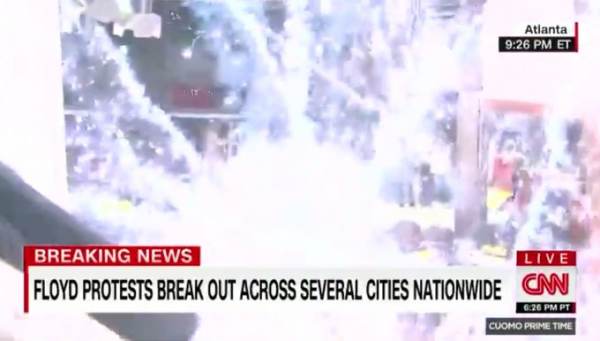 CNN’s Nick Valencia reported live from the second floor lobby of the CNN world headquarters building in Atlanta Friday night as violent protesters forced police to retreat inside the ground floor entrance. Valencia said he was shot with a BB pellet by protesters. Large glass doors were smashed. During the live report, protesters tried to enter the building but were rebuffed by police. Smoke and flashbang grenades were thrown inside. Valencia reported two police officers were hurt with one appearing to be seriously wounded and taken away. Valencia ended his report shortly after the flashbang exploded in the lobby and teargas was set off just outside the smashed windows.

Atlanta Police Zone 5 precinct is located in the ground floor of the CNN Center.

More video from #AtlantaRiot. I’m genuinely shaking right now. @CNN Center is under attack by protesters right outside a lobby. There’s genuine fear in Nick @CNNValencia’s voice right now. To think this is happening in this country in 2020 is horrifying. NO ONE deserves this pic.twitter.com/ZbWOwNcDHq

The last moments of @CNNValencia’s live shot from the entrance of the CNN Center in Atlanta before he moved to another location. pic.twitter.com/B7ZlYyt6xz

“Ted Turner started CNN in Atlanta 40 years ago because he believed in who we are as a city.

They are telling our stories and you are disgracing their building.”@KeishaBottoms denounces rioter assault on CNN headquarters in Atlanta. pic.twitter.com/uhuQvBcpkC