By Ann Vandersteel with SteelTruth.com

Republican Primary Congressional Candidate and restaurant owner, Lauren Boebert, CO-3, has had her world-famous Shooters Grill food license suspended. This is a result from her decision to reopen the Rifle, CO restaurant she co-owns, even though the Democrat Gov, Jared Polis’, statewide restaurant closure is still in place.  Boebert declared that the Garfield County Commissioners told business owners they were submitting a variance to permit businesses like hers to re-open.  Boebert says she trusted them to get that variance done and reopened her restaurant made famous by the pistol packing open carrying wait staff. 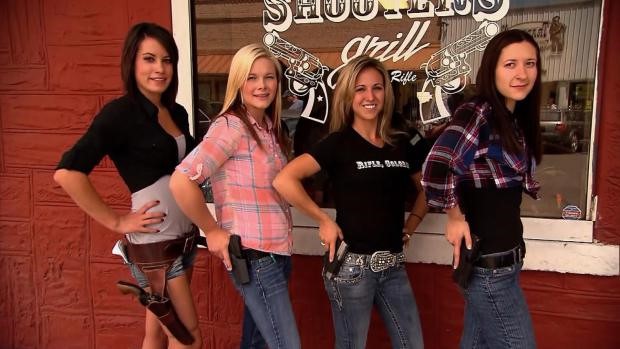 Boebert learned after being cited that the Garfield County Commissioners never followed through. Clearly frustrated with the Commissioners making $90,000/year Boebert feels for her employees who have gone without paychecks for months. And the end to this madness is still not clear.

Governor Polis has extended his Executive Order possibly into June.  Boebert sees him as a dictator without clear visibility into what he is going to do next.  With Shooters Grill’s revenue bringing in only 20% of normal receipts, and not wanting a handout nor applying for the PPP, Boebert wanted to open her restaurant so that her employees could go back to work.

Garfield County has only 2 COVID-19 deaths out of 100 cases, of which one was a transfer patient from another county. Lauren Boebert mused over the Governor Polis appointed Executive Director of Colorado Department of Public Health and Environment, Jill Ryan, as hopefully being investigated on criminal charges for falsifying death certificates and COVID records.  Mark Baisley, member of the Colorado House of Representatives, is looking into Ryan who allegedly was caught inflating COVID death certificates and is asking for an investigation.

With only 30% capacity, Saturday May 9, 2020, Shooters Grill reopened following all the CDC guidelines. On May 12, 2020 they were issued a cease and desist by the Chief of Police followed by a Judge ordered cease and desist for dine in services on Wednesday May 13. Thursday May 14 the restaurant opened back up on the streets following proper social distancing. Then Friday, May 15 at 5pm Garfield County suspended their food license.

Boebert contends that her restaurant is cleaner than most grocery stores. Her frustration is demonstrated in her interview on SteelTruth.

The CO-03 Congressional Candidate will not sit back quietly while Governor Polis wrecks our country. She says she has too many people depending on her to sit back and do nothing. “Now our government is choosing winners and losers. Local businesses are being shut down while Walmart’s and large chains stores are remaining open” exclaims Boebert.  Why is it that public health officials are expending all their energy on small businesses to make an example out of Boebert while all she is just trying to do is just pay her employees?

Lauren Boebert announced her candidacy for the Colorado 3rd Congressional District in December of 2019 and won top line on the primary ballot through District Assembly with their primary on June 30, 2020.  Boebert with her Glock on her hip was made famous for confronting Beto O’Rourke, in Aurora CO