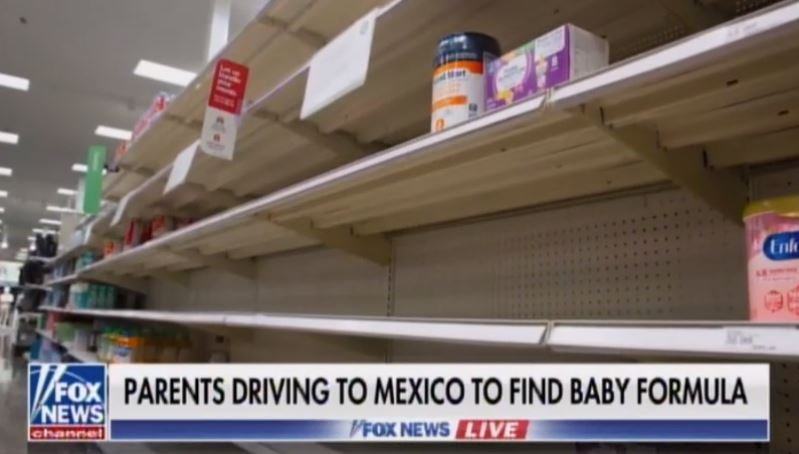 Did you ever think you’d live to see American parents relying on Mexico for their baby’s survival?

Back in May The Gateway Pundit reported that American parents were traveling to Tijuana to purchase baby formula.

The out-of-stock rate hit 70% in May nearly double the rate from April.

The country is still facing shortages of the critical food product.

This is your country under the Pelosi-Biden regime.

This week, after several months of baby formula shortages the Biden regime announced they will start importing formula from Mexico.

It only took them six months to devise this simple plan. They are really that pathetic.

Today the Biden administration announced it is providing logistical support to import about 16 million 6-ounce baby formula bottles from Mexico. The project starts this weekend. It involves the Department of Health and Human Services expediting trucks that will drive about 1 million pounds of Gerber Good Start Gentle infant formula from a Nestle plant to U.S. retailers. This will nearly double the amount of formula imported to the U.S. to date.

The Biden administration announced Wednesday that it is providing logistical support to import the equivalent of about 16 million 8-ounce baby formula bottles from Mexico starting this weekend, as part of its efforts to ease nationwide supply shortages caused by the closure of the largest U.S. manufacturing plant. Cargo flights from Europe and Australia have flown baby formula into the U.S. Two new rounds of air shipments will begin this weekend.

The White House wants you to think this is wonderful news and proof that they are on this problem, working to get formula on store shelves. That narrative can only be believed by people who have not been paying attention to the Biden baby formula crisis at all. There were warning signals about potential shortages last fall.