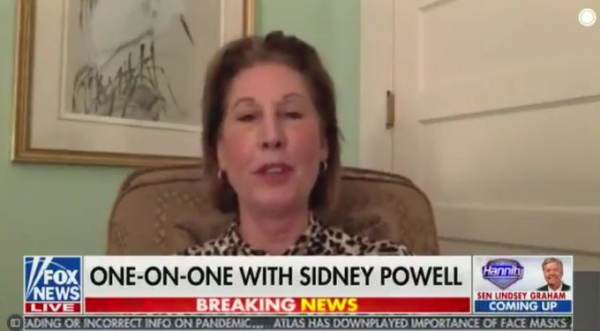 Attorney Sidney Powell said on the Sean Hannity show on Fox News Monday night that a witness to election irregularities was beaten up and is in the hospital. Powell spoke about the attack while speaking about witnesses needing protection as a reason some are not going public and signing affidavits. Powell said some are in the government, others are in roles that require confidentiality, and that they need protection by the government.

Powell: “They’re gonna lose their job. Their lives have been threatened. Uh, one witness we know of got beaten up and is in the hospital. There have been all kinds of repercussions against people who have come forward to tell the truth. And no, Democrats don’t like whistleblowers, they only like liars who claim they’re whistleblowers.”

The video clip of Powell’s remarks was posted with a heavy dose of snark by a Daily Beast reporter:

This is just sad.

Hannity takes Sidney Powell at her word that her witnesses can’t come forward “without certain protections in place” and that they “require confidentiality” because their “lives have been threatened” and one has been “beaten up and is in the hospital.” pic.twitter.com/5ZmAUPFIgF

Powell does not go into detail about the attack on the whistleblower in this clip.