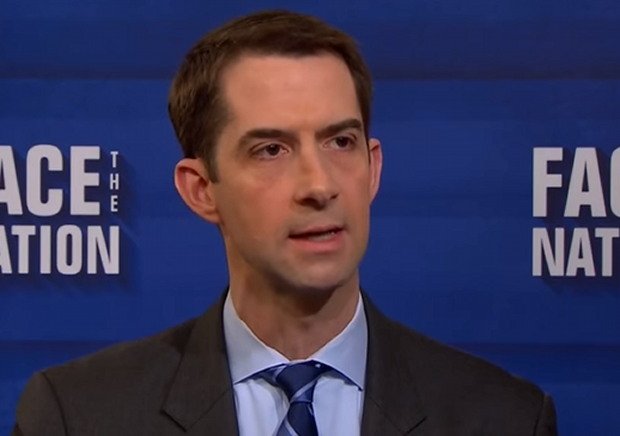 Republican Senator Tom Cotton wrote an op-ed calling for the military to be used to stop the rioting in American cities.

That is a position shared by a majority of Americans.

The New York Times published Cotton’s column, and now the far left activists pretending to be journalists at the paper are freaking out.

The Thought Police Are Out in Full Force, Demanding Compliance

Cortney touched on today’s truly insane New York Times controversy, in which Times “journalists” and others on the Left are angrily denouncing the paper for running an op/ed written by a sitting US Senator, espousing a majority-supported proposal. Sen. Tom Cotton calls for the invocation of the Insurrection Act in areas of the country where police are unable to quell violent riots and looting, citing previous (rare) examples of presidents deploying the military to enforce order.

A recent poll from Morning Consult, which Cotton mentions in the piece, shows that the public — rightly horrified by the burning of cities and communities — favors this idea by a two-to-one margin, garnering the support of nearly four-in-ten black voters. But the Official Left, led by the Times’ own employees, has decided that this opinion was not only wrong, but so “dangerous” that it should not have been published:

The so-called ‘paper of record’ is now like a liberal college campus. What’s next, safe spaces?

NYT reporters in a rare open revolt over the opinion side running Tom Cotton’s op-Ed calling to deploy the military to “restore order.” pic.twitter.com/MgLuR8EunJ

I commend the courage of the @nytimes leadership.

They ran my piece—even if they disagreed with it—and stood up to the woke progressive mob in their own newsroom.

This was the right thing to do. https://t.co/AIWlbA8Raw

These journalists want to police thought crimes but not the real crimes unfolding on the streets of New York.

The world has truly gone mad.