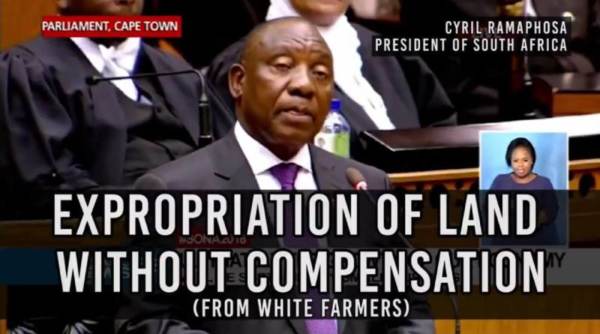 The government voted in agreement to take land from white farmers without compensation.

This same plan turned South Africa’s neighbor Zimbabwe from a state of plenty to a starving failed state.

The parliament sang before voting to take white-owned land without compensation.

The country’s National Assembly approved a proposal to change the constitution to make the so-called reforms legal in a vote of 183 to 77.

This paves the way for land to be taken from farmers without giving any kind of compensation.

And now lawmakers have agreed to set up a committee that will write and introduce a new bill for land expropriations.

A deadline of the end of March next year for the committee to present its first report to parliament has also been agreed.

But there were heated scenes in the House when politicians clashed over the plans.

According to local reports, Economic Freedom Fighters MP Hlengiwe Mkhaliphi argued land grabs must go ahead as she declared: “Your time is up, white people”.

This came as the IFP MP Mkhuleko Hlengwa said the plans undermine South Africa’s position as a democratic state.

According to the Daily Maverick, he said: “To achieve real and effective land reform is (possible) under the existing Constitution, not your (ANC) populist agenda.

On Sunday the South African government laid out rules for confiscating land without reimbursement.

This will likely cause a huge economic panic in the region.

South Africa’s government laid out conditions on Sunday for when land might be confiscated without reimbursement, saying a new law submitted to parliament would pass constitutional muster and reassure investors unnerved about property rights.

The law would allow land to be confiscated without reimbursement in certain cases if it is unused, abandoned or poses a safety risk, Public Works and Infrastructure Minister Patricia de Lille told a news conference.

But she emphasised that compensation would also be possible and final decisions would be in the hands of the courts.