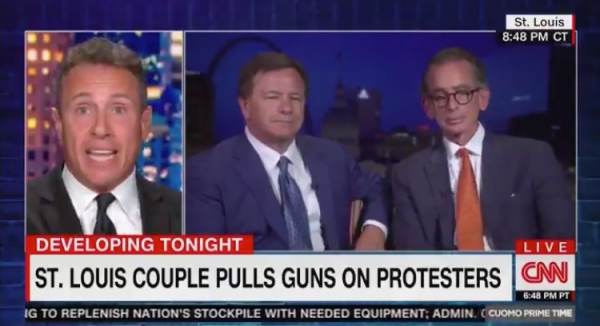 St. Louis homeowner and attorney Mark McCloskey appeared on CNN Tuesday evening to discuss his confrontation with Black Lives Matter militants who broke through a gate onto a private street in his neighborhood.

A livestream of the militant mob clearly shows they entered through a gate into a private community.

Mark McCloskey and his wife Patricia defended their home from hundreds of Black Lives Matter militants.

CNN hack Chris “Fredo” Cuomo said Trump probably retweeted the video of the McCloskeys defending their homes because he “liked the image of white resistance” to the BLM movement.

McCloskey responded by dunking on Fredo with an epic one-liner.

“I’m glad you’re a mind reader because no one else thinks you are,” said McCloskey.

Chris Cuomo ends with back-handed swipes at Mark McCloskey as an image of whiteness and opposition to Black Lives Matter, so McCloskey fires back with some

: “I’m glad you’re a mind reader because no one else thinks you are.” pic.twitter.com/ewowmBeSFg